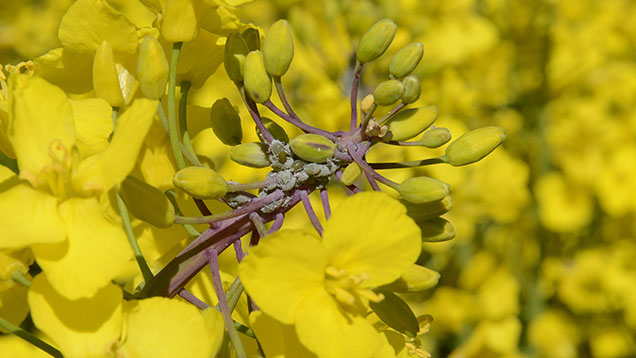 Dry warm weather in southern England is encouraging the build up of aphids in oilseed rape crops which could cause damage to pod-bearing stems.

Some experts are seeing rapidly increasing colonies of mealy cabbage aphids in some flowering crops and are urging growers to be vigilant about controlling these pests.

Simon Roberts, technical manager at Syngenta, is seeing infestations of up to 10% of plants in patches of some fields in southern England, with larger colonies causing damage to stems.

“Growers should initially be on the lookout for the main raceme turning a purple colour and bending over, which is characteristic of early aphid infestation,” he says.

“Growers should initially be on the lookout for the main raceme turning a purple colour and bending over, which is characteristic of early aphid infestation.”
Simon Roberts, Syngenta

Close inspection is likely to reveal a few aphids active on the stem and once numbers build up, which can take just a few days, growth becomes twisted and deformed and so can limit pod development, Mr Roberts adds.

Treatments with contact-acting pyrethroids can be disappointing so he suggests pirimicarb where the additional fumigant activity can deliver good results.

For practicality, this treatment can be used in conjunction with fungicide sprays used to protect against sclerotinia disease at flowering.