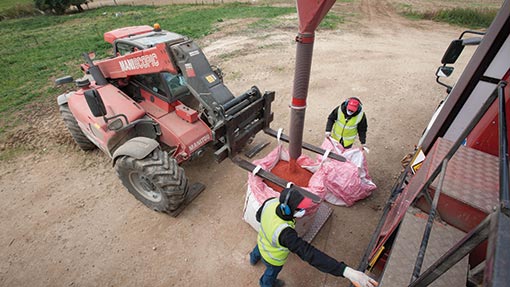 A new neonicotinoid insecticide seed treatment product will be available to cereal growers for 2015 to aid control of important pests, subject to approval.

It has also been shown to repel the cereal growers’ number one pest, the grey field slug, minimising seed hollowing and subsequent establishment losses.

However, the addition to the seed treatment armoury of imidacloprid and clothianidin in a dual formulation will be welcome news for growers concerned about slug control.

“With methiocarb now banned, options for slug control are slowly being plucked away from us, so anything that reduces early damage is very useful,” he added.

Currently, one-third of the UK cereal area is treated with a clothianidin-based seed treatment and it acts as a cost-effective management tool in a busy period, allowing growers to delay heading out to fields to spray a foliar insecticide to protect their crops against BYDV.

“They are also a very environmentally efficient way of using pesticides, with a limited effect on the surrounding fauna, as long as correct practice is followed,” said Mr Adam.

Despite being similar insecticides in the neonicotinoid class, the two products have slightly different pest control spectrums and the combination of the two aims to fill gaps on both sides.

SP16006 delivers 25g of imidacloprid and 25g of clothianidin per 100kg of seed and in addition to the extra slug control, has been proven to give control of other important or emerging pest threats.

See also: Brush up on your seed treatment stewardship

Bayer has conducted 150 trials across Europe in areas where there have been known problems with certain pests, comparing the new formulation with rates of straight imidacloprid and clothianidin at 70g and 50g per 100kg of seed, respectively.

“The formulation is giving similar control of aphids as the straight products, but it is also giving control of wireworm, cereal ground beetle larvae and reasonable control of leaf hoppers,” explained Mr Adam.

Wireworm can be damaging to UK cereal crops, particularly when established after grass, but cereal ground beetles (Zabrus tenebroides) are less common in the UK.

However, Mr Adam said the damaging zabrus larvae are being found in some parts of southern England and are an emerging threat to the domestic crop.

“The same can be said of leafhoppers, which are a vector of Wheat Dwarf Virus (WDF) and are now a significant problem in France and Germany.

“The virus is present at low levels in the UK, but has the potential to increase in the coming years if milder conditions become the norm,” said Mr Adam.

There is also anecdotal evidence that the active ingredients give useful control or reduction in damage from sporadic autumn pests such as gout fly, frit fly and yellow cereal fly.

Containing the controversial neonicotinoid insecticides that are claimed to affect bee health, care will need to be taken to ensure dust is minimised when SP16006 is used.

In France, dust as a source of environmental exposure to neonicotinoid insecticides has been a concern, particularly while establishing maize crops.

Bayer has conducted tests on seed treatment dust suppression using polymer coatings and it was found to reduce levels by up to two-thirds.

“Dust is considered unwanted and dangerous, and quite rightly, so we are recommending that when the product is applied to seed it should be mixed with a polymer,” said Mr Adam.

The product is currently in the late stages of evaluation by the Chemical Regulations Directorate, which has been nominated to assess the product formulation for the European Commission.

If approved, the label will restrict its use to wheat, barley and oat crops sown between 1 July and 31 December to limit exposure to pollinator insects.

“It has also been shown to be crop safe and it will be launched and marketed under the ‘Deter’ branding,” added Mr Adam.