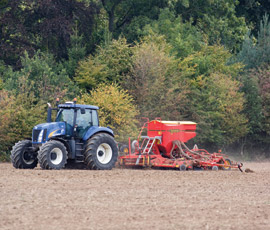 “It’s been a mixed bag all round,” he said. “Considering how the crops looked in the spring, it’s amazing where some of it has have come from.”

The Edgar, Zulu and Relay winter wheat yielded between 7.4t and 8.4t/ha, coming off at 18% moisture.

“We had a surprise meadow field of Relay that we couldn’t get to with fertiliser until the first week of May, which then reached 9t/ha,” said Mr Dann.

“We also had another field which reached 7.4t/ha that we were going to pull up in the spring because it looked so bad.”

The 20ha of high erucic oilseed rape yielded 2.9t/ha, with 28ha being replaced with spring barley and grass seed due to the poor growing season.

The Tipple and Renaissance spring barley yielded between 4.9t and 7.4t/ha, but did not reach malting quality.

“The light land was very disappointing. The best yields were where the moisture was, and the showers of rain in the area seemed to keep missing us,” said Mr Dann.

Grass seed yields were higher than average, at 710kg/ha. And combinable peas yielded between 2.47t and 4.9t/ha.

With harvest finished for the year, Mr Dann was well ahead of schedule.

“We had a late start to harvest, being about two to three weeks behind, but we finished last Saturday night (31 August),” he said.

“Now everything’s off the field, the rape’s in the ground and somehow we’re now two to three weeks ahead.”