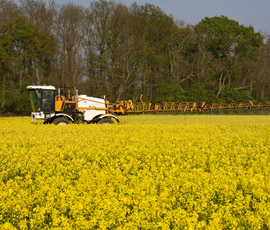 Early germination of sclerotia is prompting fears that oilseed rape crops are likely to be at higher risk of sclerotinia this season.

Germination was first recorded on 12 March at ADAS Boxworth in Cambridgeshire, one of six sites in England where BASF-funded ADAS sclerotinia monitoring takes place. Levels were up to 12% this week, in contrast to last season where no germination was recorded at all.

Germination has also been recorded at Starcross, Devon, ADAS Terrington in South Lincolnshire and at ADAS Rosemaund in Herefordshire.

“This is the second earliest germination in recent years,” says Peter Gladders, a plant pathologist at ADAS. “Overall activity is still low, but only the warm spring of 2007 gave earlier germination than this.

“Soil temperatures are still below the 10C, which is usually required for active germination of sclerotia. As they increase, there is likely to be more germination and the prospect that this season will have a higher risk than in the past three seasons,” he warns.

Rain will be needed for sclerotia maturation, he adds. “It takes anything up to 14 days for the sclerotia to mature and release flushes of spores – but it looks like it could be synchronised with flowering.”

Temperatures of above 7C are then required for infection to take place. “It is too cold for infection as it stands, but if we get night-time temperatures above 7C, then growers will need to make sure some protection is going on.”

Early flowering could exacerbate the risk, says Gary Jobling, oilseed rape development manager for Syngenta. Crops are beginning to move growth stages quickly in the current warm conditions, which could result in an early and intense flowering period.

“If we have crops with a short flowering duration this season, plants will be exposed to high levels of risk over a short period, so maintaining a high level of protection is imperative.

“If flowering is extended, which may be the case in the wetter north of England and Scotland, careful timing through the flowering period can give protection across the full duration.

“While sclerotinia spores can travel on the wind, those fields that have grown oilseed rape in recent years, or are directly downwind of fields with a history of disease, will be at most risk and a priority for protective programmes,” Mr Jobling says.

Dr Gladders agrees protection should be maintained throughout flowering, with Easter a likely start date for many, if infection conditions are met.

“When planning programmes, spray at early flowering, and then wait for about three weeks and get a second spray on. You will need at least six weeks’ protection in a season like this,” he advises.

Growers will also need to assess whether they need growth regulatory or light leaf spot activity when making an early flowering spray, he adds. “There is a lot of light leaf spot brewing up, which will need a good azole mix.”

A mix of metconazole and boscalid in new product Tectura could be a good choice where sclerotinia and growth regulation will be required, he adds.