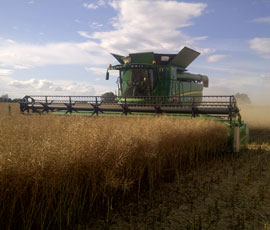 James Hinchliffe is delighted with his wheat and oilseed rape yields at Bank House Farm, Goole, Yorkshire, although the worst is yet to come.

So far 32ha of PT211 rapeseed had averaged over 5t/ha, with one field, drilled on 24 August, doing 5.56t/ha, and another with some pigeon damage touching 5t/ha.

“We also had 16ha of Camelot on heavy clay, which yielded 4.25t/ha, so we’re delighted. And because it’s short, it was very easy to combine direct,” he said.

“We’re going to try Troy this year – as soon as the yield on semi-dwarf varieties matches the taller ones it will be the way to go.”

Farmers in the area had cut a lot of wheat since the weekend, with plenty of the early variety Gallant coming off.

“Our neighbour has finished his 49ha of wheat, and the other neighbour, who’s got about 364ha of wheat, has cut a third of it,” he said. “When these big combines get going they can really clear a lot of land.”

However, there were a few weed problems where the crops were thin, he added.

And the later oilseed rape looked pretty awful. “We’ve got two more fields of good looking PT211, which we might get into today (15 August) or tomorrow if it stays dry.

“Then we have one really bad field of PT211, which was eaten by slugs and pigeons, and a final field of Excalibur, about half of which is okay, while the other half is full of mayweed after pigeon damage.”