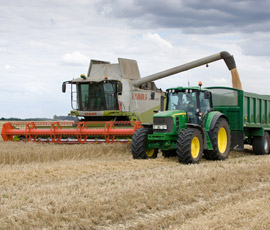 The wheat harvest kicked off in the eastern arable heartland of England this week, with early reports showing reasonable yields and very good quality.

Combines were moving through scattered crops of winter wheat on lighter land, dodging the showers and turning in some good milling grain samples.

With a big chunk of the winter barley already cut in southern England and Wales and oilseed rape progressing slowly, attention is switching to the bigger wheat crop.

Andrew Tetlow of AWT Farm Services started cutting some of his milling wheat on Sunday, grown on the farming group’s lighter land near Newmarket in Suffolk.

The first 110ha of wheat cut was coming in at a good yield varying between 9t/ha and 11t/ha at 11.6% moisture for the milling variety Solstice.

Early samples were coming off the combine at a high quality of 12.8% protein, 333 Hagberg and 78-80kg/hl specific weight.

“We are pretty pleased so far. We are dodging the showers, but we are still harvesting,” Mr Tetlow told Farmers Weekly.

He, together with his farming partners, grow about 1,200ha of largely milling wheats out of an arable farmed area of 2,000ha.

Mr Tetlow supplies the farmer-owned co-operative Camgrain, which is the sole supplier of wheat for Sainsbury’s in-store bakeries, and the group reported a good start to harvest.

“The wheat harvest really got going on Sunday when the combines started, and most farmers are happy with the quality at the moment,” he adds.

Most of the winter barley is cut across Cambridgeshire and Northamptonshire with pretty reasonable quality and low nitrogen content for brewing, while oilseed rape is more of a mixed bag.

The rapeseed crop is one of the latest over the past 30 years with only 10,000t in the group’s stores. Early crops are looking reasonable although later crops are likely to be poorer, he fears.

So far yields have ranged from 7.5t/ha for wheat following sugar beet to 8.7t/ha for crops after oilseed rape, and he expects yields to improve on his better heavier land.

Mr White notes that most of his crops were drilled early in good conditions so results may show little resemblance to what may be the national picture.

Further north, Graham Macintyre in Nottinghamshire is to start cutting wheat this week once he completes 160ha of winter barley, which is yielding about 8t/ha. He is looking to move on to 100ha of wheat on his lighter sandy land and expects the milling variety Gallant will probably yield about 7t/ha.

He manages nearly 900ha at Broomhill Grange, Edwinstow, six miles north-east of Mansfield, where he says the oilseed rape harvest may be some two weeks away.

“The harvest has been reasonable and not as bad as we had feared, so it is fingers crossed for the wheat,” he says.

The first spring barleys are also now being harvested with early reports showing good yields and quality from this crop which has seen a big increase in area this season.

At Manor Farm, South Newton, Wiltshire, Henry Swanton has already cut all his 60ha of Cheerio malting spring barley. “It has yielded very well at about 8.5t/ha with a moisture of about 15%, so we are very pleased,” he says.

“It is generally quite an early variety, which has been very helpful and allowed us to make the most of the weather,” he adds.

Mr Swanton hopes to get 100ha of Propino spring barley cut as soon as the weather dries up.

Farming on predominantly chalk land with some clay caps, he has also started harvesting his Quartz oilseed rape which has been yielding about 4.6t/ha.

“Everything is getting there and I think the wheat won’t be too far off. We’ve got half down to Cordiale, which will go first and then Invicta will be the last thing we cut,” he says.

Harvest is well under way for Chris Ascroft at Wilbraham Farms, Cambridgeshire. He has finished his winter barley and oilseed rape harvest and has moved on to 120ha of Propino spring barley.

“We’ve had a very nice sample of 70kg/hl bushel weight and 14% moisture. We’re not sure of the yield yet but it looks reasonably promising,” he says.

On the south coast of England in West Sussex, the oilseed rape harvest has been delayed with one leading buyer receiving only 600t of the 3,000t of rapeseed he normally sees by this time of the season.

Robert Wilson, manager at Chichester Grain, says despite the lack of grain currently delivered in store, early signs of quality are promising.

“Oilseed rape quality has been good so far. It is too early to tell generally, but the oil level is running about 43-44% and moisture has all been below 8%,” he says.

One grower who is further ahead than most is Alastair Strange at Rectory Farm, Bosham, near Chichester. He started harvest on 1 August and early yields of his Alienator variety have looked good.

“It’s 7.5% moisture and yielding just below 5t/ha. The first of August is a bit late for us as we were delayed with the rain, but it’s nice to get cutting after a drawn-out winter,” he says.