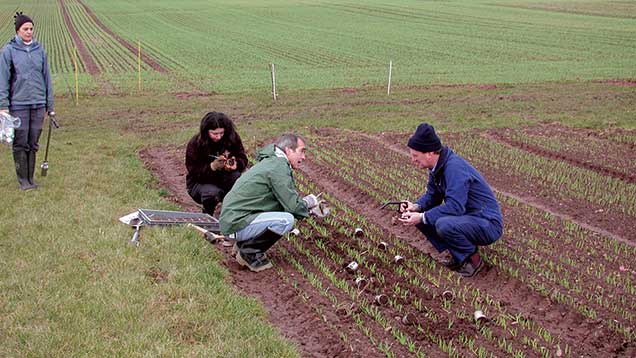 There are many ways to cultivate a field, ranging from deep ploughing to no-till farming, and choosing the right variety and cultivation technique combination is the key to getting the most out of your soil.

And early results in work being carried out by Blair McKenzie of the James Hutton Institute suggest newer spring barley varieties often yield more with a plough-based approach compared with min till.

He is co-ordinating one of three projects under the AHDB-funded national soil programme.

The project is focusing on cultivation practices to improve management advice.

It specifically builds on four existing sites that have been used to collect data over many years (two in Scotland and two in England) with the aim of understanding how tillage regimes can produce vastly different outcomes in soil status and crop yield.

The project aims to improve crop yield by managing the soil environment using best practice in a sustainable way.

Funders: AHDB and the Scottish government

Cost: £623,754 from AHDB, underpinned by the Scottish government, the Morley Agricultural Foundation and the JC Mann Trust

• Different cultivation systems produce differences in distribution, but not total accumulation of carbon in the sandy soils tested

Different cultivation systems including shallow, non-inversion tillage, or min-till, and ploughing are being compared at scales from plot to small field size.

At the plot scale, many cereal varieties can be compared, while at the small field scale, data is sufficiently robust for real economic assessment, Mr McKenzie explains.

The team at the institute is quantifying soil conditions at the four sites using several approaches – for example, soil physical tests assessing the potential for abiotic stresses from waterlogging, drought or mechanical impedance.

The resilience of the soil to weathering and machinery stresses is also measured.

While pore spaces in soil are not only paths to allow the movement of water and air, they also provide opportunities for rapid root elongation.

The key pore size for rapid drainage of water and for cereal root proliferation is, perhaps not surprisingly, about the same diameter as the fine roots of cereal plants.

Different cultivation systems and different machinery change the amount and orientation of these pores in the soil.

Root morphology is the link between soil condition and crop productivity.

“There is an opportunity through variety choice and cultivation practices to influence how roots develop and interact with the soil.

“It can take many years for the full impact of a change to soil management to be realised. Consequently, a sustained investment in research is required.

“Funded as part of a £2.6m four-year programme of soil research, this project connects a series of long-term experimental sites.

“The work will provide a robust assessment of the impact of cultivation system changes and improve understanding of soil conditions, to steer decision making.”

“The challenge is to manage crops to maximise and maintain the key soil-quality parameters that impact on yield and margins, such as water retention, resistance and resilience, and nutrient availability.”

Extrapolating from plot scale, the yield differences for the same variety at the same site were in excess of 0.5t/ha.

“We believe that, traditionally, plant breeders have selected new lines and developed them for market under ploughed rather than min-till systems.

There appears a need for breeding trials to adapt to the shift in tillage practices on farm,” he says.

Complementary work is being undertaken in a parallel project, using long-term trials to identify favourable soil management practices for potatoes and looking at the effect of potatoes in the rotation.