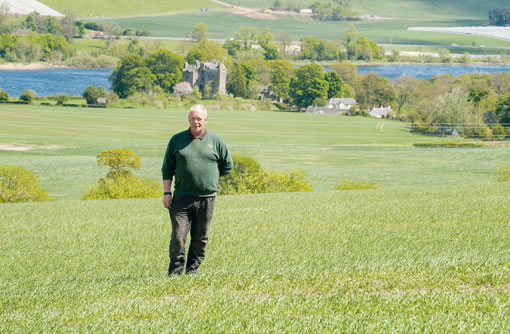 Switching to variable rate fertiliser applications has saved one Scottish grower thousands of pounds, improved his crop yields and reduced his environmental impact in double-top time.

Perthshire farmer Andrew Stirrat decided to try his own soil sampling eight years ago to investigate variations in major nutrients including nitrogen, phosphate and potassium.

“We tried just one field to have a look and see, taking samples in a ‘W’ and a ‘reverse W’ to cover as much ground as possible,” Mr Stirrat says.

After seeing the variation in fertility that the initial field trial revealed, the whole farm area was soil tested within three years.

“We started applying phosphate (P), potash (K) and lime for pH correction by prescription from the maps that SOYL provided,” he explains.

The farm has varying soils types, from heavy clay in the bottom of the Tay Valley, to light and stony soil on the higher ground over-looking Elcho Castle.

The lighter ground has seen its P indices cut from 4+ to 3 and the heavier ground has gone from around 1.5 to 2.5.

Typically, arable soils should be maintained around index 2. “It’s just a matter of maintaining P levels now on the heavy ground.

“Potash was also down to 1 and we have improved it to 1.5, so we just need to top it up a little more to the optimum index of 2.”

In 2011, he turned his attention to nitrogen and began applying the most important and also most expensive nutrient variably with his Kuhn Axis fertiliser spreader complete with Patchwork BlackBox GPS system.

More even crops were evident and Mr Stirrat says it really opened his eyes to how inefficient blanket applications are.

“We have seen definite yield benefits and, in the first year of using the system, saved around £15,000 on nitrogen, which is a significant return on investment.

“We are just feeding the crop what it needs, where it needs it, and when. It’s cutting unnecessary spend and reducing the environmental impact from run-off,” Mr Stirrat explains.

He is always looking out for new technologies, crop varieties or an inspirational idea that may have a positive impact on his farm.

Fingask Farm plays host to a number of trials, including those for breeder Limagrain and demonstration trials for agricultural distributor and adviser Frontier.

“The Frontier demonstration covers almost every arable crop and it allows them to bring clients here and make sales on their open day in June or July,” Mr Stirrat says.

In addition to the varied Frontier trials, Limagrain have spring barley and wheat trials, with the latter fully replicated variety trials taken to yield.

Mr Stirrat has his own plot drill and after receiving mapped plans and seed, goes about establishing the trials himself.

“Breeders are keen to see their varieties in the real world and managed under commercial conditions, but it also allows myself to keep an eye on varieties from seed to harvest,” Mr Stirrat explains.

It has given the farm the chance to try new varieties on a wider scale, which not only benefits the breeder, but can also influence Mr Stirrat’s cropping plans.

“It’s not for everyone as it ties up bits of land and you have no fertiliser and spray zones, but the information gained is valuable and you are helping others too,” he adds.

Spreading the gospel on fertiliser

Many cereal growers have a quiet winter while crops are in stasis before growth kicks off in the spring, but no such thing happens on Andrew Stirrat’s farm.

He is busy with a fertiliser spreader-servicing and calibration offering to businesses from Fife to Aberdeen to Inverness.

The service is also offered to machinery dealerships for new and old machines, ensuring efficient and accurate spreading from day one after sale.

In a perfect world, a spreader would have a 100% uniform spread pattern, but Mr Stirrat explains that this is almost impossible.

However, growers should aim to get as close as possible.

“Sometimes you will see ‘tigers and zebras’ in the crop and sometimes not, but until a machine has been driven through the trays, you just don’t know what the pattern is like.

”From January until the late spring and, if the weather is fair, Mr Stirrat will be out servicing spreaders and has about 90 clients.

The process starts by driving the client’s machine through a tray test to assess the spread pattern with its current settings, and here adjustments are made if required.

“People are sometimes sceptical before the first test but, when they see the results from adjustments, they are instant converts,” Mr Stirrat says.

He points out that a small adjustment to just one spreader vane can make a big difference to spread pattern and the same can be said for changes in product.

“Blended fertilisers will spread slightly differently to compounds, so it’s a case of getting the settings right for the product you are using,” says Mr Stirrat.

Noticing a demand for fertiliser advice and planning, Mr Stirrat sat his Fertiliser Advisers Certification and Training Scheme (FACTS) exam late last year to enable him to offer a more complete service to his customers.

“Dealers can offer that to an extent, by my service is more personal.

I try and educate grower on how the machine works and how to solve problems themselves,” he adds.

Mr Stirrat found the FACTS course and exam intense over a relatively short space of time, but it has benefitted both his farm and his Pro-Test (Scotland) business.

Learning the interactions between all the major nutrients and micronutrients have allowed a better understanding of how to get the most out of the farm’s most expensive inputs.

“Even if I had failed the exam, the information learned on the course was invaluable and I really enjoyed it too,” he explains.

Pro-Test also offers sprayer MOTs, with the business now carrying out between 15 and 20 MOTs each year, but Mr Stirrat is restricted with how much he can do in the winter.

“Everyone has their sprayers in the shed with anti-freeze in the tank, so it tends to be a job for the spring and summer when we are busy on farm ourselves.

“Messing around with water when it’s so cold isn’t very comfortable either.”

Jetting away to drier soils with new kit

Drainage is a key component of healthy arable soils and Andrew Stirrat has invested in the kit to get the life flowing back through his old drainage system again.

Most of the network installed on his farm dates back to the 1960s, although some is even older and he has installed new systems where replacement was required.

However, a high pressure Homburg drain jetter from Holland was bought in for a £7,200 investment to clear drain systems that are still in good working order.

It has involved a small proportion of land being fallowed each year to carry out the work, but the ground is already starting to see the benefits in the recent wet seasons.

“It was a relatively small outlay and we have already had interest in contract work, so it will pay for itself in no time,” he adds.

The water is now getting away more efficiently on the heavy ground, which is essential as machines get heavier and compaction becomes an increasing issue.

Groundwork and exploration is essential for those considering taking on their own drainage improvements to know what you have underfoot and to formulate a plan.

“It’s a specialist job, so unless you have an interest in drainage I wouldn’t bother taking it on yourself,” he advises.