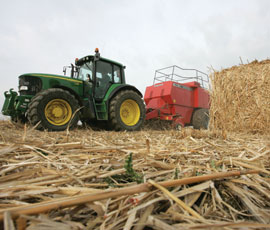 Growing energy crops to supply biomass boilers could provide a host of benefits to farmers and the rural economy in the southwest, but more needs to be done to encourage their uptake, according to a new report.

The study by independent renewable energy specialists Crops for Energy predicts that growing crops such as miscanthus or short rotation coppice on 3.5% of land in the southwest could benefit farmers by almost £28m a year.

Particular benefits can be achieved where farmers grow and use their own energy crops for heating farm buildings, replacing more expensive oil-based systems. “If a farmer is using oil to heat their farm business they are likely to be paying around 65p/litre, equivalent to around 6p/kWh. Even considering the lost revenue of taking land out of food production, it should be possible to produce miscanthus chip for around £50/oven-dried tonnes or 1.02p/kWh.”

There is also potential to grow crops for other woodfuel users unable to produce their own, such as schools or residential homes, the report says (see table for typical requirements). In such cases, growers could expect to achieve a gross margin of £416/ha for selling miscanthus pellets to end users and £378/ha for SRC chips.

But the 3.5% of land to energy crops scenario equates to 65,595ha, which is a far cry from the 800-900ha in the ground. Many of these crops are without a market due to several proposed projects failing to get planning consent or financial backing, the report says.

The government’s Renewable Heat Incentive will increase demand for woodfuel, but to kick-start the industry and grower confidence it calls for a specific scheme to provide capital grants for energy crop projects.

“Based on our findings, around £1.53m of funding is required from 2013-2020. This could assist the purchase of eight planting and eight harvesting machines and six processing facilities.”

The report also points to a number of other benefits that energy crops can provide, including:

Join the debate on miscanthus on our forum