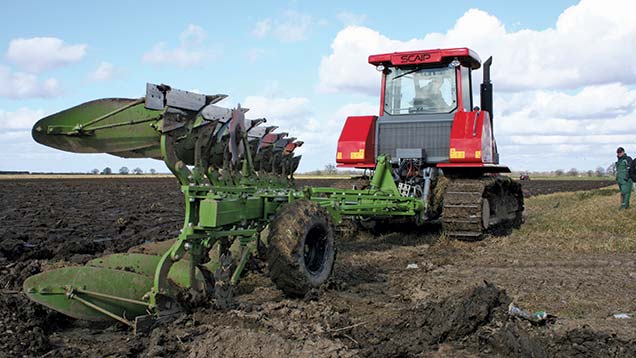 Having to work arable land late after an energy maize harvest, when slippery surface conditions can show up the limitations of rubber tracks, could result in a comeback for steel-track tractors, believes a Lincolnshire dealer.

Robert H Crawford has a long history of involvement with steel-track crawlers and Track-Marshall products in particular, as dealers when these machines were still produced in Gainsborough and as a manufacturer of crawler ploughs.

Today, the company remains a leading supplier of parts and maintenance and refurbishment services, as well as used examples of these once more commonplace machines.

“We still get a fair bit of interest in our refurbished Track-Marshall tractors, especially after a wet autumn; we supplied 18 in the past two years alone,” says Paul Zukowskyj of Crawfords.

“Rubber-track tractors have obvious advantages in terms of mobility, but on a slippery surface and for really heavy land ploughing they have their limitations.”

Crawfords sees a potential answer to late autumn ploughing on heavy ground in a new steel-track crawler. Built by Scaip, an Italian manufacturer of pipeline laying crawler tractors and other specialist equipment, the Warrior agricultural tractor combines traditional steel track undercarriage with a modern electronic management system for the engine and hydrostatic transmission.

Scaip builds crawlers starting at 150hp and there is a 200hp model with a 6.7-litre engine from FTP Industrial. But the latest addition, which Crawfords has been demonstrating in the eastern counties, is a 350hp model powered by a Caterpillar C9 Acert six-cylinder diesel.

That output puts it in a class below the three-model Challenger MT700E Series tractors, which span 378-431hp, and the John Deere 8RT models from 352-407hp, with up to 420hp for pto-driven implements.

The oscillating track assemblies produced by fellow Italian company Berco are rear driven with equal size drive wheel and front idler, supported by seven bottom rollers. The tractor’s 13.9t operating weight is distributed over a 2,590mm wheelbase and a contact area on 560mm wide single grouser track shoes of 14,560sq cm per side.

This compares with a Challenger MT700E weighing in at around 14.5t – and scope to ballast to a maximum of 17.6t – running on 2,400mm long and typically 635mm wide rubber traction belts giving a total area of 15,494sq cm per track, according to Challenger calculations.

“The key to a steel-track tractors performance is its weight relative to the power available and the ability of the track pad grousers to bite into the surface to gain traction,” emphasises Paul Zukowskyj. “For top work, spreading the tractor’s weight over a large surface area is helpful in avoiding compaction.”

The 100hp McCormick T105 handles trailed discs, a drill and rolls, and also works with a mounted tine drill.

That is the key attraction for Lincolnshire grower David Ruffell, who has run a much smaller crawler tractor for the past six years on his 136ha all-arable unit near Spilsby.

“Our land is not exactly heavy but it’s inclined to compact pretty solidly and that’s why I use a crawler for drilling and top work – as I always did when I farmed in Bedfordshire before moving up here,” he explains.

“There I used Track-Marshall and Caterpillar tractors but they’re no longer available; the 100hp McCormick is fine for the amount of land we’re farming.”

While a 170hp wheeled tractor is used for ploughing stubbles, the 100hp McCormick T105 is charged with working down the furrows with two passes of a 3.65m set of Parmiter Utah discs, drilling malting winter barley and beans using a 4m tine drill, and rolling the finished seed-beds.

Although the tractor is sometimes operated with mounted spring tine harrows, it lacks a swinging three-point linkage assembly so the Weaving mounted drill has been converted to a trailed unit with a hydraulic drawbar and rear-mounted transport wheels added.

The tractor has rear drive wheels, a front idler and five rollers within the 1,650mm wheelbase and with 450mm track shoes fitted, the tractor’s 4,690kg operating weight (without ballast) is distributed over a contact area of approximately 7,425sq cm.

“We’ve not had to touch the tracks as yet and I wouldn’t expect to for quite some time,” says Mr Ruffell. “And then the first maintenance job will be to rotate the track pins.”

Power from the Perkins 1104D Series engine is channelled through a mechanical transmission with 16 forward and eight reverse speeds and the Hi-Drive steering system is a familiar arrangement of a lever-operated clutch and brake for each track assembly.

In contrast, the Scaip Warrior (top picture) has a two-range hydrostatic transmission, using a variable flow hydraulic motor for each track to maintain full drive to both sides during turns.

An electronic control system regulates the engine and transmission to achieve the required performance at optimum fuel consumption, and other modern touches include thumb-button forward-reverse selection and engine speed memories.

The tractor’s engine is positioned well forward in the purpose-built chassis to effectively counterbalance implements carried on the 12t capacity Category IV linkage, which is carried on a swinging drawbar to allow for the crawler’s steering characteristics with an implement in the ground.

To ensure decent cooling capacity without impinging on forward visibility, the Warrior’s radiator is mounted across the back of the tractor, with a reversible fan making it easy to shift any build-up of debris.