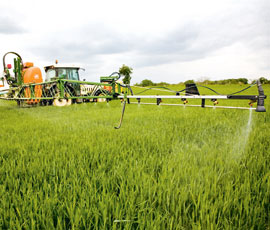 The threat hanging over the most popular group of cereal fungicides is intensifying as the European Commission pushes ahead with new pesticide rules by the end of 2013.

Virtually all cereal fungicides contain triazoles and the commission is looking carefully at whether these pesticides can be classified as endocrine disruptors and then could be subsequently banned.

This follows a report last week from the European Food Safety Authority (EFSA), which spelt out the scientific criteria to assess the effect of endocrine active substances found in the food chain.

Endocrine disruptors can interfere with normal hormone activity in humans, and any substances labelled in this category will not be able to be used in the European Union.

Industry figures say there is a risk these new rules are being rushed through to meet a political deadline and that decisions could be taken on theoretical rather the proven risk.

“This is a very serious threat to the arable and horticulture growers’ armoury. We need to see a proportionate risk-based assessment,” says NFU’s plant health adviser Don Pendergrast.

He adds that if the commission gets the definition of harmful endocrine disruptors wrong then the consequences would be severe for arable farmers.

Many popular cereal fungicides such as Proline (prothioconazole) and Ignite (epoxiconazole) are pure triazoles, while newer products such as Aviator, Adexar and Seguris are triazoles mixed with SDHI-type fungicides.

These SDHI products are generally sold in mixture with triazoles to protect against resistance build-up when used to control cereal diseases such as septoria.

Agrochemical groups say the loss of the triazoles could cut European wheat yields by 10% and make growing cereals very difficult in high rainfall areas such as south-west England and Ireland.

John Peck, BASF’s head of technical for northern Europe, says it is not proven that triazoles are endocrine disruptors and a proper risk assessment should be made.

“It is our belief that triazoles are extremely safe when used as recommended,” Mr Peck says.

EFSA concluded in its report last week that testing methods are available to identify chemical substances that can cause disruption to the endocrine system, and this testing will be used to prepare the criteria for plant protection product approval by the end of 2013.

Endocrine active substances are naturally present in some foods such as nuts, oilseeds and soya products, but if they lead to imbalance in the endrocrine system it can result in diseases such as diabetes, infertility and certain types of cancer.

“No single test is sufficient to decide whether a substance is an endocrine disruptor and several tests need to be done and then assessed together by experts in a weight-of-evidence approach,” says Tony Hardy, chairman of EFSA’s Scientific Committee.

Substances classified as most likely to be eliminated by the new rules include triazoles such as epoxiconazole and tebuconazole, and also the insecticide thiaclopride and some herbicides.

Other triazoles such as prothioconazole and propiconazole are listed as substances which may be eliminated.