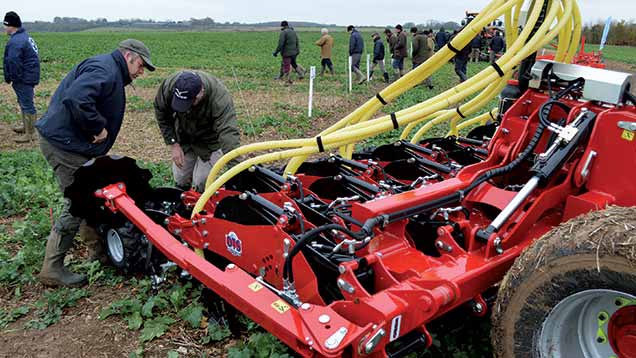 Lower seed rates for oilseed rape and the use of autumn growth regulators may be needed to improve on the disappointing yields this summer.

Oilseed rape crops promised much throughout the growing season only to fail to deliver and one expert points to oversized crop canopies as a major reason.

Andrew Richards, senior agronomist with advisory and distribution group Agrii, says oilseed crops have the potential to yield 6.5t/ha but many produced little more than half that level.

He points out that big canopy crops produced disappointing harvests in 2012 and 2014, while smaller canopies did better in 2011 and 2013.

“We need more open and smaller crops; we simply had too many pods in 2014,” he says.

His formula for a 6.5t/ha crop is to produce 236 pods per plant with 18 seeds per pod and 30 plants per square metre.

With some hybrid oilseed rape varieties this summer producing 500 pods per plant there is need to lower seed rates, he says.

“We need more open and smaller crops; we simply had too many pods in 2014”
Andrew Richards

His group’s trials are comparing traditional seed rate of 50 seeds/sq m with half that rate, or 25 seeds/sq m, with little visible difference in what has proved to be good autumn establishment weather for oilseed rape crops.

He also points out growers may need to apply plant growth regulators at the 4-leaf stage, as in parts of Germany, to control excessive canopy growth in the autumn.

He adds there are a number of reasons for the lower than expected yields this summer, but the creation of large canopies was a key one.

“Oversized canopies and too many pods per square metre was a major contributing factor,” he says.

Mr Richards also says root development was often restricted and this caused problems when temperatures rose sharply in late June and into July and caused water stress in plants.

“Pod-fill stopped almost overnight with many crops hitting a brick wall in terms of water availability,” he says.

He also outlined five other reasons for poor yields in summer 2014:

Mr Richards was speaking at an AgriiFocus workshop in Wiltshire, where the group is operating a trial site at Upper Upham, some five miles south-east of Swindon.