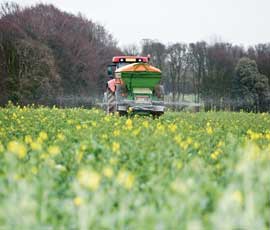 Two new Dekalb hybrid oilseed rape varieties are being trialled this season alongside regular crops. In the second of our series, Philip Case looks at canopy development

Farmers growing a new hybrid oilseed rape alongside their existing varieties are generally giving the newcomer the thumbs-up as it enters the key spring canopy building phase prior to flowering.

But for one grower, cold weather combined with late drilling has meant having to pull up a proportion of the crop, along with several other varieties.

Seven regular Farmers Weekly contributors are among 50 growers trialling the new Dekalb hybrid ExPower. The trial aims to assess how the variety performs alongside other oilseed rape crops using the same crop management.

Dorset grower Andrew Blenkiron is growing a 2ha strip of ExPower in a field surrounded by 32ha of Castille. Both crops have come through the cold winter well, he says. “They are just about right and not too forward.

“I was concerned about both in early November as they looked very backward,” he says. “That was purely because the field is north facing, but luckily, they have since grown away well through November and kept up with everything else.”

Stem elongation started more quickly with the ExPower, which is about a week ahead of the Castille.

Both crops received 85kg/ha of nitrogen and 75kg/ha of sulphur, at the beginning of March, and were treated with Falcon (propaquizafop) for the control of volunteer cereals and grassweeds and the fungicide Sanction (flusilazole).

The rest of the nitrogen and Proline (prothioconazole) will be applied pre-flowering. Then a plant growth regulator and an insecticide will be applied at flowering, says Mr Blenkiron.

Kent grower Andy Barr says his ExPower looks well and is slightly more forward than his Excalibur, but both had a similar green area index (GAI) of 2-2.5 at the beginning of March.

Crops have suffered some damage from pigeons and rabbit grazing. This year, Mr Barr will be delaying or reducing his nitrogen applications to try to save on fertiliser costs. His spring crop inputs will include 200kg/ha urea and 90kg/ha sulphur.

Plant growth regulator will not be applied, although crops will receive nutrients at early stem extension, he says.

Leicestershire grower Keith Challen is growing 24ha of ExPower alongside 362ha of other varieties, including DK Cabernet, Ovation, Astrid and Sesame.

The ExPower was using an Autocast applicator on the combine a week later than the other varieties. “But, it has just about overtaken them and looks more forward now.”

The first dose of liquid nitrogen and sulphur went on 12 March, at a rate of 100kg/ha N and 20kg/ha S. A second dose of nitrogen is planned for mid-April.

Growth regulator fungicide Caramba (metconazole) was applied last week for disease control and lodging, along with a shot of boron and liquid foliar phosphate Proplant. This will be followed up at flowering by an application of Nutriphite PGA to help encourage fresh rooting and maximise nutrient efficiency.

Likewise, Tony Reynolds is impressed with the 3ha of ExPower he is gowing alongside Alienor, Excalibur and Sesame, making up the rest of his 48ha of rape.

“The stubble is tall and this has helped keep the pigeons away, but conventional varieties have suffered more damage than the hybrids,” he says. “It’s currently performing best alongside the Excalibur – it’s hard to tell them apart.”

But Cambridgeshire grower Edd Banks has had to pull up around 1.5ha of his 5ha trial plot of ExPower, along with two other varieties.

“It’s a real shame and it’s typical this has happened in a year when oilseed rape prices are sky high,” he said.

Mr Banks drilled his ExPower on 5 September, but crop growth was badly stunted by frost in October, which meant it did not get away until after the cold December.

Despite receiving an early dose of nitrogen in mid-February, parts of the crop still look thin and, on the advice of his agronomist, he is planning to pull it up and drill spring linseed.

“Some of our other later drilled oilseed rape has also been lost, including two fields of Castille and a small field of Palmedor,” said Mr Banks.

• Seven of our regular farmer contributors are among 50 growers trialling two new hybrid oilseed rape varieties from Monsanto’s new breeding programme – DK ExPower and DK Sequoia. All seven have chosen to trial DK ExPower and Farmers Weekly will be following their progress this season through to harvest.