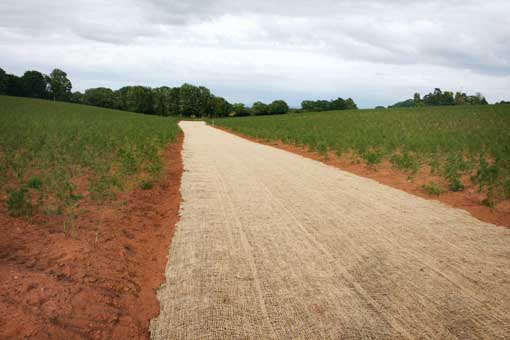 Grassed waterways and mulches in combination with shallow cultivations could help mitigate the increased risk of gulley erosion in some cropped fields, according to a three-year on-farm investigation.

It is generally accepted that climate change has already resulted in significant changes in the amount, frequency, type, intensity and energy of rainfall experienced in the UK, with an increasing frequency of “extreme” rainfall events.

There are several key factors that can combine to promote gully erosion during these intense periods of rainfall. These include fields with steep or long slopes, micro-topographic features which concentrate overland flow in one small area of a field plus soils susceptible to water dispersion and/or those with a tendency to seal under rainfall.

Cultivation practices which involve extended periods of bare soil also increase the risk, as does having soils with a low infiltration capacity due to compaction and/or poor structure.

Following the wet summer of 2007, Natural England and the Environment Agency challenged Cobrey Farms to control the unacceptable levels of soil erosion and diffuse pollution that originated from some high-risk asparagus fields. There was a problem with regular gulley erosion. For example, one gulley was about 150m long, with more than 10-15t of top soil lost from the field. 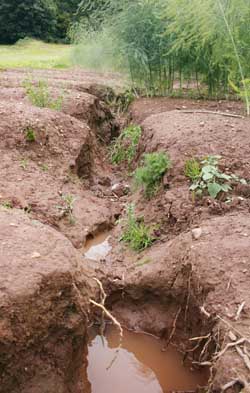 Working in partnership with Jane Rickson of the National Soil Resources, we (Cranfield University) helped John Chinn of Cobrey Farms investigate practical solutions that would both prevent sediment laden runoff entering Coughton Brook and allow continued asparagus production. The solution had to fit within the existing field layout and agronomic practices.

We first looked at controlling surface runoff by the use of geotextile-lined grassed waterways, which are designed to transport runoff from intense rain events without causing erosion, allowing both infiltration and sediment deposition.

Widely used in the US, they are wide, but shallow watercourses designed to maximise contact between water and grass in order to slow down the flow. The dimensions depend on many site-specific factors, such as the area, surface cover and soil condition. At Cobrey Farms, they are typically 2m wide at the top of the field increasing to 9-15m at the outlet.

Using a biodegradable jute geotextile made by ABG Geosynthetics helps minimise the area lost to the waterway, less than half that of a waterway lined with grass alone. Therefore, the initial cost of using the geotextile is offset by taking less land out of production.

A key factor when constructing the waterways is to ensure there is a good connection between the geo-textile material and the soil, to prevent water flowing underneath.

Installation involves levelling and grading the soil followed by drilling or broadcasting the grass seed and then laying down the geotextile. Broadcasting is preferable, as it avoids having bare soil in rows.

The location of the waterways in the field is very site-specific, but is generally where the water wants to go. With Mr Chinn, we orientated the asparagus rows to reduce slope down the rows, resulting in a herringbone pattern with the waterway in the middle.

Results were so successful Mr Chinn has extended the measures. It has successfully eliminated water runoff from some fields and hugely reduced the problem from others. He has now installed 2km of geotextile-lined grassed waterways in six fields that were previously associated with regular gully erosion.

Applying the mulch after shallow cultivation reduced runoff and soil loss by over 95%, compared with conventional practice (see graph).

Straw gave a greater reduction than the compost, but has a much higher cost of £60/t when compared with compost at £5-9/t. But the costs need to be weighed up against the nutrient and soil conditioning benefits.

However, more work is needed, such as what is the best way to apply the mulch and this year we are trialling the equipment used by strawberry growers to apply straw.

We are also looking at different cultivation options, such as subsoiling versus light cultivation, in combination with mulch to improve infiltration. This may prove beneficial, as the heavy trafficking of the soil caused by foot traffic during asparagus harvesting plus the low soil organic matter status has led to severe compaction in the furrows.

By increasing soil infiltration through soil disturbance/mulching, there will be the added advantage of optimising soil moisture re-charge and storage, thus reducing the need for expensive irrigation during periods of drought stress.

In conclusion, while work is ongoing, I believe grassed waterways and mulching in combination with shallow soil cultivations could have a role in reducing gully erosion in fields with high erosion risk, such as some fields of potatoes and other crops involving extended periods of bore soils. Success at Cobrey Farms is in large part due to the effective dialogue that has been established between Mr Chinn, the Environment Agency, Natural England advisors, and Cranfield University.

Rob Simmons is a lecturer in soil erosion and conservation at the National Soil Resources Institute, Cranfield University, Bedfordshire.