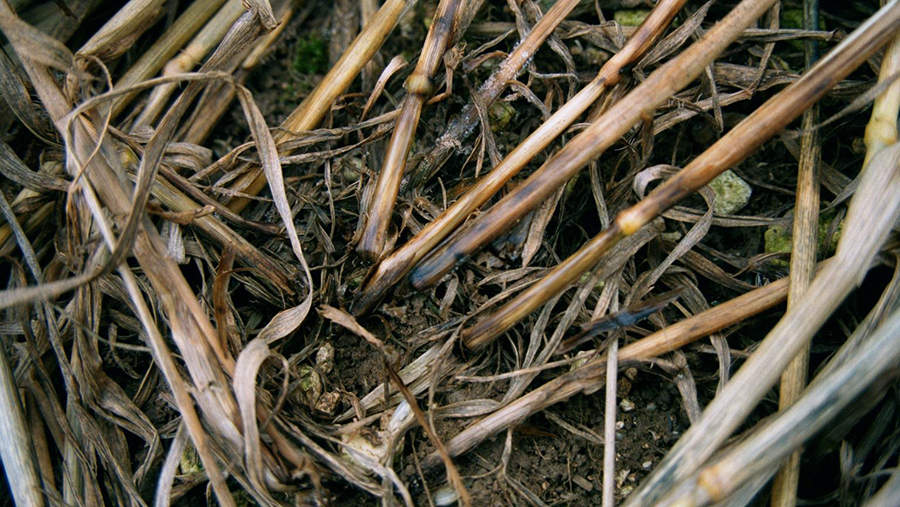 Eyespot disease could be lurking in the base of wheat crops and growers are being advised to consider the risk when finalising their T1 fungicide spray plans.

The combination of wet weather and cooler temperatures during March and early April have provided ideal conditions for the fungal disease and it is being found where growers wouldn’t usually expect to see it.

For Crop Management Partners agronomist Tristan Gibbs, eyespot is something he rarely sees in the south-east corner of the UK.

However, it can quite easily be found this season, especially in earlier-drilled crops. He puts that largely down to the weather, but feels variety resistance might be a factor.

“Eyespot ratings appear to have fallen away over time. We only have two varieties with better scores than 6 – Zyatt and Revelation – but we have numerous 4s, and Sundance scores less. Perhaps it is a factor.”

He hopes it will dry out now that warm weather is forecast, but will factor it in to T1 sprays.

“I’ve seen the odd bit in the past, but usually symptoms disappear as leaf sheaths die off during spring growth.”

He hasn’t found any signs of penetrating lesions, but feels the disease might need dealing with.

However, he stresses it’s important not to lose sight of priorities.

“Only if you get penetrating lesions and severe crop lodging will it cause the same sort of yield reductions as septoria or rusts. This is where the focus needs to be, with eyespot control built in, rather than the base for T1 mixes.”

High septoria pressure means Mr Cromie will opt for a second-generation SDHI with prothioconazole or epoxiconazole.

“The partner azole can be changed for specific cases – prothioconazole for eyespot or fusarium and wheat after maize, epoxiconazole for brown rust.”

What is eyespot and how to identify it?

Eyespot is caused by Oculimacula yallundae (W-type) and O acuformis (R-type) and it infects stem bases, leading to reduced water and nutrient uptake.

It also causes whiteheads, lodging and yield loss in the crop.

Richard Cromie says eyespot can be difficult to identify – even for an experienced agronomist like him.

“Early on it is difficult to separate from stem-based browning, being more a brown smudge. It is only when you see the dark brown ringed eye that it confirms the presence of the disease.”