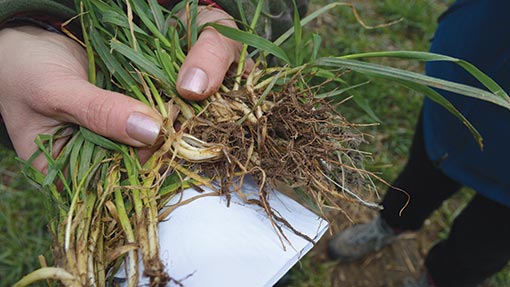 A high-risk eyespot season is expected, with wet and warm weather, together with a swing to early drilling, likely to lead to a sharp rise in the stem-based disease.

Eyespot can cut cereal yields by up to 30% and costs the industry as much as £20m a year, and all indications point to a season in which the disease could develop rapidly.

Rumiana Ray at the University of Nottingham says the disease is present in most wheat crops and is just waiting for the right conditions to establish on stems.

“All the factors point to a high-risk season, especially in early-drilled crops on heavier land,” she says after the completion of a two-year survey of the disease in England.

The disease produces eye-shaped stem base lesions that reduce water and nutrient uptake and cause whiteheads, lodging and loss of yield. It affects all cereals, but wheat is often the focus of attention due to the large size of the national crop.

Crop inspection is key to assessing whether fungicide control is necessary and how treatments will dovetail with the control of other diseases in wheat such as septoria and rusts.

“Once the lesions penetrate the stem the disease will develop with the rise in temperature,” Dr Ray says.

Initial results from her two-year survey showed the two eyespot pathogens, known as W- and R-type, were present in more than 90% of arable soils used for growing wheat across England. It also showed that seed treatments known to suppress take-all actually led to a rise in eyespot.

By giving some control of take-all in intensive cereal rotations, these seed treatments allow eyespot to take over from take-all disease on the root and stems.

Dr Ray’s work also disproved the theory that oilseed rape and legumes were effective break crops to control eyespot caused by the W-type pathogen, as it was seen to survive and increase in the soil and on wheat stems following these non-cereal crops.

All the key factors, such as early drilling and favourable temperature and moisture conditions, are in place this season for a high eyespot year.

Early drilling of winter cereals in September encourages the disease as it prolongs the period for infection. Mild, wet conditions – with temperatures higher than 5C, abundant rainfall and high humidity – this autumn stimulated the production and spread of fungal spores from the soil and debris to the developing wheat seedlings.

Both pathogens require mild temperatures of about 10-15C for infection and disease development. High humidity above 80% also favours lesion establishment on stems.

The excessive rainfall through the winter, coupled with the mild temperatures this year, helped the disease and even the drier March is unlikely to hinder the disease significantly on many crops.

“It is warming up now, but there is still plenty of moisture in soils and there are many less-developed crops at risk, especially in the West Midlands and the North,” she says.

There is a wide range of eyespot varietal resistance in winter wheat ranging from a lowly 3 for Conqueror on the HGCA Recommended List to an 8 for Revelation.

The Pch1 resistance gene is very effective against eyespot, but there are only a few varieties that carries it, such as Skyfall, Revelation and Grafton.

Varietal resistance is an important tool in controlling eyespot, and in fields where there is a high risk growers are advised to integrate control methods by delaying drilling and choosing a variety with good resistance.

If there is a history of eyespot in certain fields this is likely to continue as the disease is soil-borne and although it does not easily spread from field to field, it tends to remain a problem in individual fields with high inoculum potential.

Growers should assess the risk of eyespot based on drilling date, previous cropping, varietal resistance and the presence of symptoms of the disease, she advises.

There are two causal organisms which cause eyespot – Oculimacula yallundae (W-type) and Oculimacula acuformis (R-type). The W-type cause symptoms earlier in the season and causes the stem to collapse and therefore lodging, while the R-type develops slower and symptoms are less obvious at early growth stages. This pathogen blocks the vascular bundles in the plant stems and is more associated with whiteheads. Both species can reduce yields and losses of about 10% can occur in the absence of lodging or whiteheads.

The HGCA has produced a topic sheet for growers on managing eyespot in winter wheat that can be used to identify risk.

Ploughing can increase the risk of the disease as it is likely to bury competing pathogens while bringing to the surface eyespot inoculums that had survived deep in the soil.

Dr Ray suggests growers should start assessing fields from mid-tillering onwards and take a sample of 20-30 plants – if 20% are infected with eyespot a fungicide treatment should be considered.

Diagnosis can be difficult with dry and dirty plants and the disease can be confused with foot rot or sharp eyespot that also occur on stems as part of the stem-based disease complex. Symptoms of these diseases are easier to distinguish on wet, clean stems, she says.

Crops should be examined up to the T1 spray timing at GS31-32/33 in winter wheat, when a treatment decision should be made.

“Fortunately, we have chemistry that is very effective against eyespot, with a yield response as much as 1t/ha in a high-risk year when eyespot-induced lodging may occur,” she says.

The two most effective fungicides are the older-generation SDHI product boscalid and the triazole prothioconazole. Cyprodinil is also effective, but has a limited range of control of other cereal diseases. Field doses under high-risk situations should be at or above two-third rates of the products.

Some of the new generation of SDHIs are also active against eyespot, but do not give as good control as the most effective products in a high-disease situation. Thus, when facing high eyespot disease pressure these new SDHIs maybe better placed at T2.

The older fungicide product prochloraz is now less used due to resistance and reduced sensitivity of the fungi to the chemical.

The most effective time for a treatment is the T1 April fungicide timing, as there is no consistent evidence to show any yield boost for an earlier T0 eyespot spray.

Dr Ray suggests a T0 spray could be considered where a susceptible variety is grown and it exhibits more than 20% incidence of penetrating eyespot lesions at GS30.

A good T1 spray can give up to 50% control of eyespot resulting in a yield benefit in susceptible varieties of up to 0.7t/ha in the absence of lodging or whiteheads, while an additional T2 spray of boscalid-epoxiconazole at 1l/ha has shown yield responses of up to 0.3t/ha.

Growers often underestimate eyespot in wheat as they focus on the more visible foliar diseases such as septoria and rusts.

“Eyespot is less obvious and remains hidden beneath crop canopies, thus early diagnosis is key for making timely treatment decisions to prevent yield losses due to this disease,” she says. 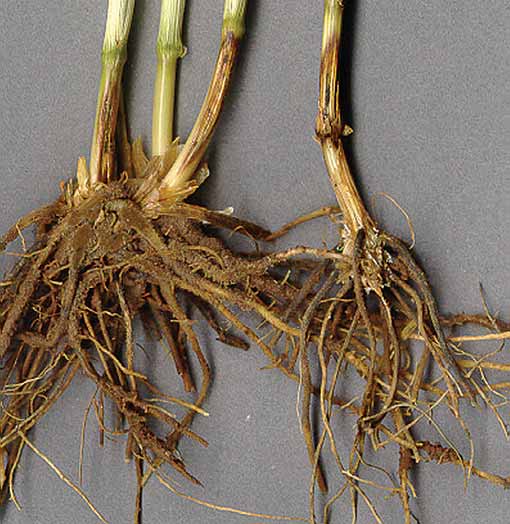 Classic symptoms of eyespot show eye-shaped lesions on the stem base.