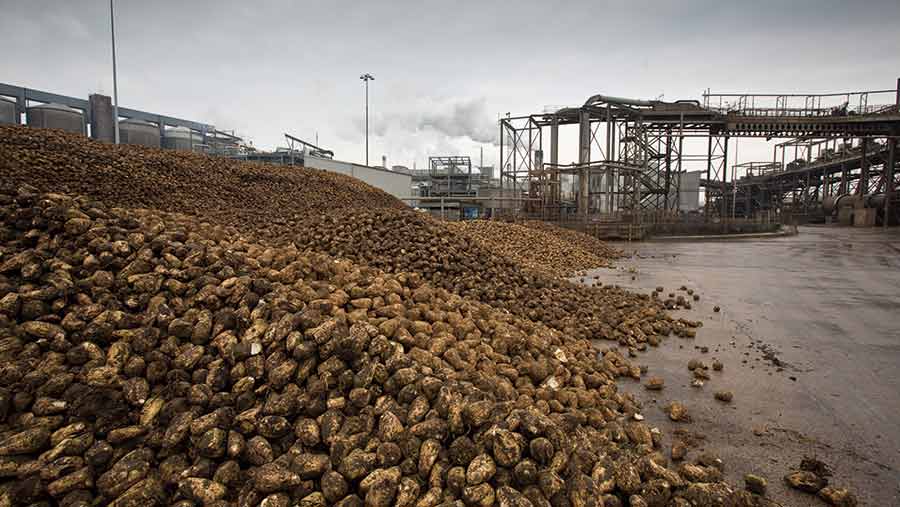 A bumper sugar beet harvest is posing challenges – with growers complaining that factories are struggling to keep up with crops still waiting in clamps for processing.

A record average beet yield of some 85t/ha is expected by the time lifting finishes next month. But NFU Sugar chairman Michael Sly said poor factory performance and supply chain difficulties meant harvested crops were being left on farms for longer than was acceptable.

See also: Why British sugar boss is posititive about Brexit

The record harvest – or campaign – was “quite an achievement” for the sector, said Mr Sly. Although in total slightly less crop would be harvested than in 2014 because the area grown was smaller, it was still fantastic that growers had achieved record yields.

British Sugar’s four factories at Bury St Edmunds, Cantley, Newark and Wissington are expected to stay open longer than usual to cope with the bumper crop. But the long campaign hadn’t been helped by a slow start to processing and lack of investment and poor reliability, said Mr Sly.

He said: “We have continued to suffer from poor factory performance – particularly at the flagship Wissington factory – which has then been compounded by other supply chain issues with field to factory deliveries hampered by poor planning and execution.”

Beet was in danger of deteriorating because it was taking so long to process harvested crops, added Mr Sly.

“It is unacceptable that sugar beet sits in clamps for far longer than is necessary on farm – not only is it detrimental to crop recovery, but growers are carrying the risk.”

It was pleasing that the Newark factory had sliced 11,000t of beet – a record amount in a single day – on 29 January. But it appeared some factories had too much beet, while others had too little, he told an NFU council meeting at Stoneleigh Park, Warwickshire.

Growers supplying the Wissington factory in particular seemed to be carrying the burden for farmers in other areas, said Mr Sly. The need to divert crop in liquid or crystal form between factories had highlighted a lack of flexibility or vision within the system.

Paul Kenward, managing director of British Sugar, said since 2013 it had invested £250m to ensure its four factories perform well.

“Disappointingly, some of our factories have had a difficult start to the campaign – in part due to us commissioning new equipment.

“Although our overall performance has stabilised, Wissington’s performance has continued to be disappointing, and we have now put capital and management plans in place to improve its reliability and throughput.”

A £350m sugar beet factory planned for Yorkshire now looks as though it will be built in Spain instead.

It follows a breakdown in talks between Northern Sugar, a subsidiary of Al Khaleej International in Dubai, and North Yorkshire County Council.

Capable of processing up to 36,000t of sugar beet daily, the factory would have been supplied by some 3,500 farmers.

Negotiations had focused on a site close to the A1 at Allerton Park, Marton-cum-Grafton, between Harrogate and York. But it now looks as though the facility could be built near Merida, western Spain, instead.

Project director Mark Beardwood said the Yorkshire project had not been cancelled – but an issue had arisen over the price of land. North Yorkshire County Council confirmed it was no longer in talks over the proposed sale of the site.

NFU Sugar chairman Michael Sly said: “Our understanding is that they are actively exploring an alternative site in western Spain, which seems to be their preferred choice at the moment, although the project hasn’t been terminated as yet.”

He added: “We strongly expect that the project will go to Spain with generous planning conditions and tax breaks to deliver it.”