Robert Drysdale’s CV makes an excellent roadmap for aspiring farm management professionals. Like most people at the top of their game, he makes it look easy.

But the business he now manages for The Co-operative Farms is as complex as it is broad. He has seven contract farming clients and a host of other enterprises to work round, including a major pig unit.

He combines a flair for agronomy and crop production with a cool determination to farm to the best of his abilities. This single-minded determination has carried him far. “In early school careers interviews I was the only one who knew what I wanted to do.”

Robert was brought up in Fife where his father and uncle farmed in partnership on a mixed arable and beef unit. Graduating from Edinburgh University with a degree in agriculture, he applied straightaway to CWS Agriculture (as the Co-op then was) and was taken on as a trainee manager.

A spell at a 3000-acre Cheshire dairy and arable farm was followed by a move to Wiltshire’s Down Ampney estate, where Robert received his first exposure to contract farming.

Since his appointment at Monymusk Estate, Robert has led the business through significant expansion. Since his arrival in 1997, the business has returned a profit every year.

Originally managing Monymusk estate’s 650ha of arable land and 110-strong sucker herd, His policy has been one of 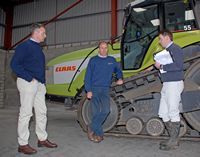 rationalisation and expansion against a strong business case. He amalgamated management of two separate units early on to reduce costs and drive greater efficiency.

Robert’s rotation is based on winter barley, winter oilseed rape, winter wheat and spring barley to allow the workload to be spread and keep larger kit such as the farms’ 6m Vaderstadt drill working to best advantage.

But he has a keen eye to tailor crops to the right market opportunities. “We grow for a defined market, rather than growing a crop and then searching for one.” High erucic acid oilseed rape is aimed for at an industrial market.

“In Scotland the spring barley market is dominated by traditional, low-nitrogen varieties such as Optic and Oxbridge. In an effort to move out of this market I started to grow high-nitrogen barleys like Maresi for grain distilling, which is much more niche.

Crops are grown on contract for distillers and allow Robert to budget on a guaranteed price. “And being a grower of a significant quantity allows us some ability to negotiate contracts.”

Robert’s philosophy is to keep things simple. The beef enterprise fits in well alongside the arable business, taking in straw and providing muck. Combined with the muck from Fraser Farms’ pig unit, this has yielded great benefits to the farms’ light soil structure. 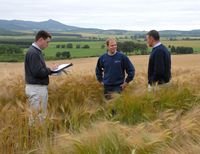 It’s clear that Robert views Monymusk as his home – he sees the future in further expansion and greater responsibility with in the Co-operative Farms group – he has just taken on supervising the Co-op’s 850ha Perthshire arable business.

He feels his achievements can speak for themselves. He successfully sold wheat at more than £100/t from his 2006 harvest, and brought in his overheads for that year £17,000 under budget. Operating profits blew the forecasts by £53,000.

He’s passionate, too, about the team he works with. “The importance of retaining good employees cannot be overestimated.” He carries out annual appraisals with individual staff members and all his full-time staff are long serving. One student has managed to clock up eight harvests’ work.