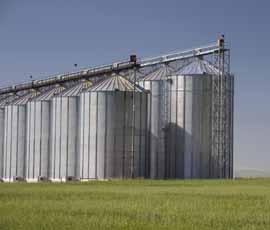 A farmworker who was trapped and sinking in a grain silo escaped death after firefighters rescued him.

The man, who has not been named, had been removing grain from inside the silo when he got into trouble. Fire crews were called to help the man at Winterbrook Farm, in Blewbury, near Didcot in Oxfordshire.

Station manager Bob Speakman said: “Grain is like quicksand and he was up to his chest and sinking, with the potential for life-threatening injuries.”

Firefighters worked alongside Oxfordshire Ambulance Service Hazardous Area Response Teams to free the worker in a controlled manner so that he did not suffer further injury.

The worker remained conscious throughout his ordeal and was described as “extremely lucky” to escape unhurt.

Mr Speakman added: “Although this type of incident is rare and the worker had every right to be there, it highlights that farms can be dangerous places.”