After dipping his toe into precision farming just over three years ago, James Porter is now embracing the latest technology that can help optimise crop inputs and ultimately increase his profits.

The realms of precision agriculture can be daunting for some. This is perhaps supported by a recent AHDB Cereals and Oilseeds report that shows adoption of the technology has been slower than expected.

There is such a vast amount of technology out there – from a basic Global Positioning System (GPS)-enabling autosteer on tractors, to the latest drones fitted with remote crop-sensing technology – that it is difficult to know where to start.

It is also tricky to quantify the economic benefits of some technologies, plus skills and education on how to use it and the data produced is lacking.

Despite these hurdles Mr Porter, who crops about 607ha with his father near Halesworth in north-east Suffolk, not only sees the short-term benefits of such technology, but also the long-term value that gathering data specific to his farm can provide. 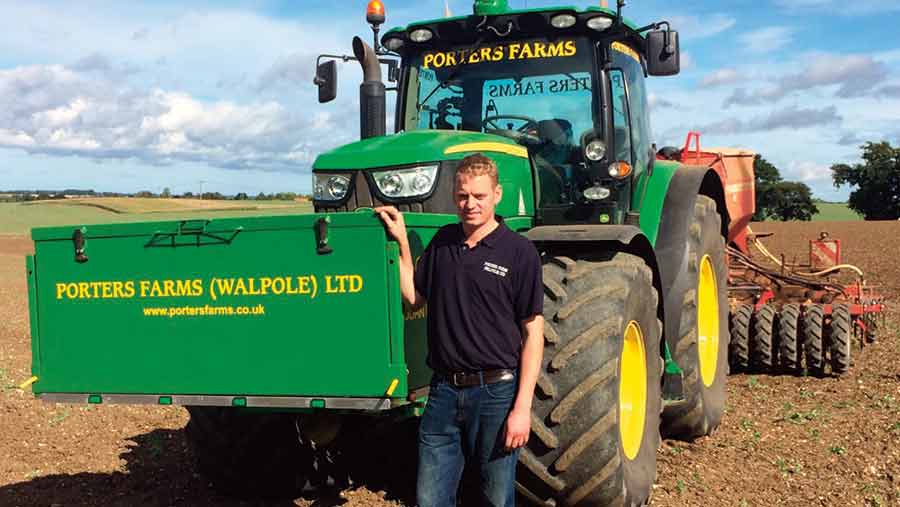 “The plan is to build up our records in Gatekeeper so we can look at every part of every field and see what we can change to make it more productive and profitable,” he says.

With a long-term goal in mind, Mr Porter’s starting point arrived when the time came to change the farm’s main workhorse, which carries out all drilling, spraying, top dressing and top-down cultivations.

A new John Deere 6190R was ordered in 2013, complete with the company’s StarFire 2 GPS receiver, enabling auto-steer to within +/-10cm accuracy and auto-section control of both sprayer and fertiliser spreader.

In the same season, a new 4m Horsch Sprinter drill and Kvernland Exacta TL GEOspread arrived on farm, both with the capability of variable-rate application.

“Every time we change a machine now we will try to update the technology that’s on offer. If it is worth having, we will give it a go,” says Mr Porter.

To start getting the full potential from the newly acquired kit, Mr Porter needed to use an electromagnetic induction scanner to map soil variability across the farm. He had the whole farm scanned by precision services provider Soil Quest during harvest 2014.

After consultation between Mr Porter and Soil Quest, any tweaks are made and maps saved on a flash drive and transferred into the tractor’s (John Deere) Greenstar system for variable P and K applications and variable-rate drilling.

Once each field job is complete, the application data is then transferred back to Gatekeeper to record exactly what each field has had and when.

The first maps didn’t arrive from Soil Quest in time for autumn drilling in 2014, but variable-rate application kicked off in earnest in spring 2015 and advantages were quickly noted. 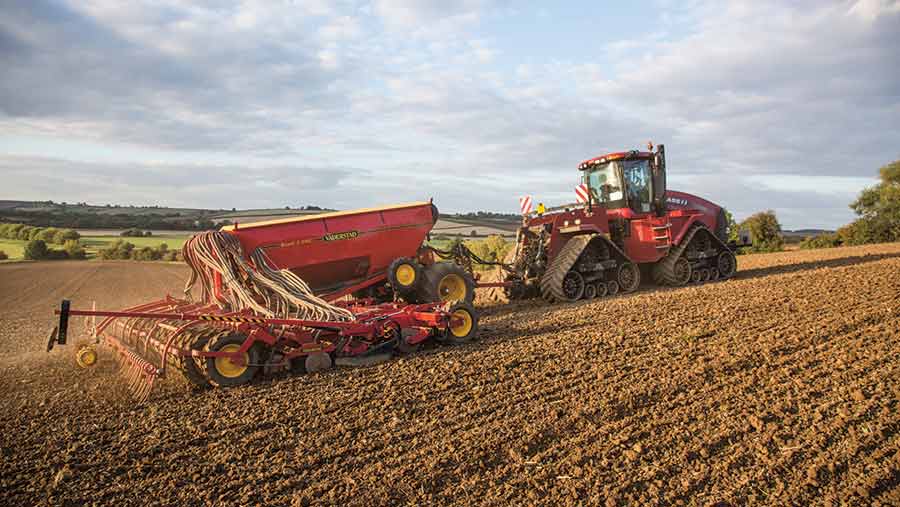 Since switching to variable-rate P and K, the farm has almost halved its fertiliser requirement (excluding nitrogen) and seeding maps have resulted in more even crops, explains Mr Porter.

“In one field we had a [winter wheat] seed rate of 114kg/ha at one end and about 200kg/ha at the other, with some steps in between.

“Previously on hills or clay caps you would see poor establishment or slug damage looking over the field, but last year we didn’t have that at all – crops were green all the way across,” he adds.

While precisely managing crop inputs is a fundamental part of precision farming, so is relating it to output and while field yield data verified over a weighbridge has been entered into Gatekeeper for 20 years, Mr Porter wanted to look at variability within fields too.

With the combine changed for harvest 2016, a new New Holland CR8.80 has the capability to map yields, but a software issue had to be resolved before it could be combined with other field data.

“The John Deere system and Gatekeeper talk to each other well and although New Holland’s system is similar, we had to buy an extra software module called PF Actual for about £300. That now allows us to bring the yield maps back into Gatekeeper,” he explains.

Yield information can now be combined with soil type, drainage maps, nutrient applications, seed rates and chemical inputs and as the farm’s dataset grows over a number of seasons, it will enable closer scrutiny of all management decisions.

“Is it nutrition? Is it drainage? Do we need more or less seed? It is all about knowing where to target attention and inputs and then seeing if what we have done made it better or worse.

“There are parts of fields that will never yield well, so it might tell us that we need to manage them in a different way – perhaps putting them in environmental schemes, which could be more cost-effective than cropping,” says Mr Porter.

When considering the cost of his precision farming investments so far, Mr Porter says it is very difficult to quantify, as many of the technologies were included in recent machinery reinvestments.

He says the GPS system cost in the region of £8,000-£10,000, which was offset by a 40% grant from Catchment Sensitive Farming. On top is an annual license fee of £600 and £7/month subscription for a mobile sim card receiving RTK signal off mobile phone masts.

“The 6190R is doing about 1,300 hours/year and the guidance is used on every operation, so we are getting good value.”

Soil Quest offer their initial scanning, testing and mapping service for about £28.50/ha, with Mr Porter paying in the region of £11/ha/year to subscribe to map updates and for customer support.

He says it was a big outlay to have the whole farm done in year one, but he wanted to be up and running as quickly as possible across his acreage, so managed to strike a deal.

“We agreed with Soil Quest to have the whole farm scanned, while paying half up front and the rest a year later, which helped ease cashflow.”

While Mr Porter’s experience has so far been positive, he opted to switch to the more accurate real-time kinematic (RTK) guidance system after just one year using the StarFire 2 GPS.

Although there were no problems with the StarFire system, having more accuracy and repeatability of RTK enabled the 6190R to put tramlines in the same place every year.

“I don’t think we would have done anything different, except go for RTK straightaway.

“With the tramlines in the same place, there has been a benefit, particularly in spring crops. Sometimes we would be a quarter of a tramline out and you would be able to see that in the crop all through the season,” he explains.

Mr Porter adds that compatibility between machines is also a key consideration for those looking to take their first steps in precision farming.

“Ensure when changing any implements that they are truly Isobus compatible, as everything needs to talk to each other easily. Some manufacturers will say they are, but they aren’t.”

Find out more from James Porter’s experience at the Precision farming Event on Tuesday 18 October, where he will be taking part in a discussion at 10am.

The single-day event at the Newark Showground also features the latest kit from a range of machinery exhibitors. Tickets are priced £15 on the day or £10 by pre-registering at on the Precision Farming Event website or call 0845 4900 142.