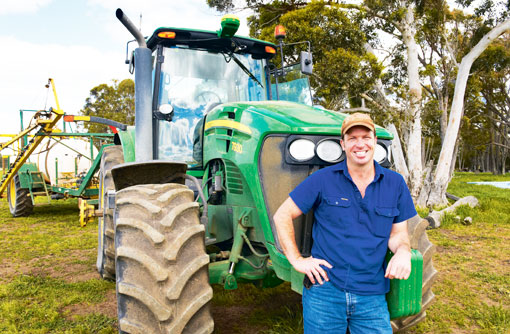 I was in an old shearing shed of ours today, cleaning out some of the old files that have accumulated there over the past 10 years. One of the files was titled “New ideas and machinery 2003”. It was some of the pamphlets I had collected that year from the field days on new technology and machinery. I was shocked at how out of date it was.

In fact, from the outside looking in, farming looks much the same as it did 10 years ago. It’s when you compare the way you used to do things that the differences really become apparent.

Take, for instance, spraying crops. Ten years ago we used to spray our crops by driving around the paddocks in circles, with a foam “blob dobber” leaving the visual marker for the next lap. Each section was turned on and off manually and after eight hours you were a mental wreck.

Now look at today – GPS, auto steer and boom. I enter the paddock, fold out the wings, press go and sit back as the sprayer takes over, occasionally interrupting my tweeting or phone call with a beep if something isn’t working on speck. While that sort of technology was talked about 10 years ago, I didn’t think I would be using it now. In fact, that technology would have cost as much as the tractor did back then. It was when I travelled to the USA and witnessed the small, unmanned machines both spraying and cultivating crops that I was shocked at what the future could hold.

Small is what they were. If you’re a machine without a driver, you can work any time, day or night. You don’t need to take time off. Small-track machines were printing chemical direct on the leaves of weeds, assessing the size and type and applying the correct chemical. They travelled up and down the rows day and night, only returning to base to fill up and recharge, much the same as some modern vacuum cleaners do today.

The first of the unmanned tractors went on sale this year in the USA, and this time I won’t be surprised if there is one in my field in 10 years’ time.