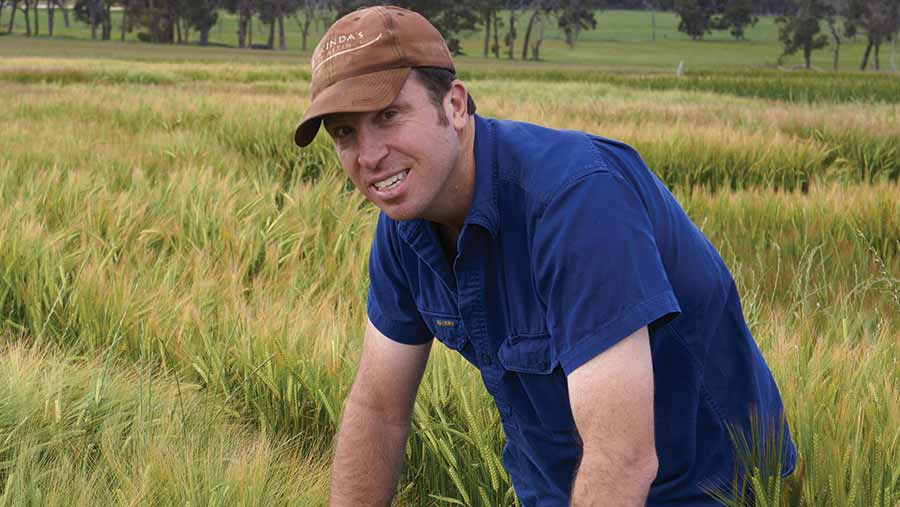 What a fantastic season we have had this year. With an early wet start and a warm damp winter the crops couldn’t have been better at the end of August.

I would describe it as one of the best seasons in my 20 years of farming. Then it got hot, windy and it stopped raining.

It hasn’t rained here for more than eight weeks and the crops are maturing about two weeks earlier than normal.

The barley from outside the paddock looks great. Lots of long heads and thick stubble ripening to a golden brown colour, until you walk into the crop and the grain resembles bird seed. Too much potential and not enough rain.

At least we had a wet winter, for many others it was also very dry. This brings about problems that growers in the UK might not have to think about that often.

Due to the remoteness of the farms here, we are self-sufficient for all our water needs. When it doesn’t rain there’s no water for livestock or the house.

Farmers will be selling off their sheep and cattle as the water runs out and carting water from the nearest town, sometimes over 150km, for drinking water.

The dry brings about other unique problems as well. What if there’s a fire? How can you fight it without water?

In a normal year if there is a fire on a farm a pump is set up on the nearest dam and surrounding farmers come with fire trucks and help put the fire out.

Closer to home, one of the biggest sacrifices is the house garden, which has been let go to die. A beautiful winter garden shrivels in the sun, with only the toughest plants making it through to the next year and the prospect of re-establishing a new garden next winter.

Technology and innovation is helping too, with better crops grown with less moisture and better tools to help decision-making.

If nothing else, Australian farmers are resilient. It was 34C the day before writing this and with summer officially still a month away, it could be a long hot summer.

Rob Warburton farms 3,000ha with his wife Jen and two daughters in Kojonup, south of Perth, in Western Australia. Cropping includes wheat, barley and oilseed rape. Wildflower seed is grown for retail. Merino sheep are reared for wool and meat