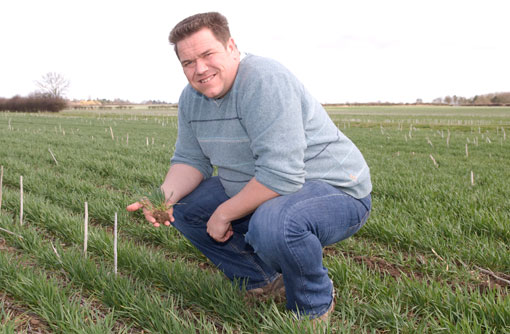 The weeks keep rolling by and the crops just don’t seem to move. I’ve never known such a frustrating year, an early dose of nitrogen and phosphite teased a few days of rapid growth, and then the cold winds put the brakes back on, writes Keith Challen.

I decided to live with the autumn crops we’ve overwintered, but I’m not sure yet if this has been a good idea. Our clays are very heavy and wet and just don’t lend themselves to spring cropping. Not only do I want to avoid combining in September, but we could end up back to square one.

Thanks to Robert Barnes for hosting a Controlled Traffic Farming workshop last week, it was fascinating to look at heavy clays that have had no cultivations for five years or any traffic between the wheelings. This has to be large-scale farming at its most efficient, with increased soil porosity, a reduced carbon footprint and an increase in yield. This must be the way forward, especially if the weather is going to be more extreme.

Ground works are due to begin next week on a new 5,500t grain store. This will sit right next to our dryer so harvest efficiency should be excellent. We’ve gone for a really simple design of a single span building with concrete panelled walls and a single conveyor for filling down the centre of the shed with a surcharged heap. This should double the throughput of our dryer as the bottleneck has always been the old carrier conveyor down the old shed.

Jenny and I had a really interesting visit to the “Brake” charity headquarters last week, it was great to meet some of the team face to face, I know as farmers we play an important role feeding the world, but I have to admit to being completely humbled by people trying to save lives and make our roads a safer place. We were thrilled to learn that we’ve raised over £3,000 so far.