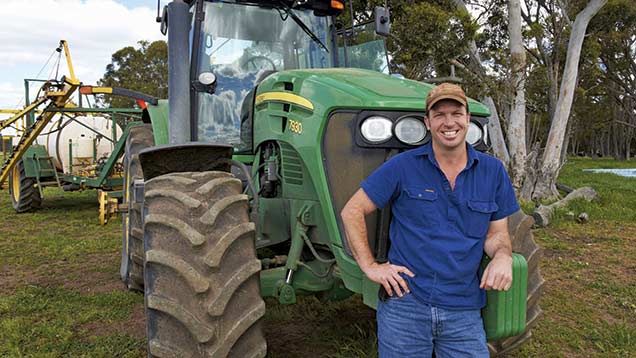 Harvest is away here in the southwest of Western Australia and so far most of the machinery so going well, apart from a snapped final drive on one of the harvesters. The area than is giving me the most problems is communication.

I’m not the best communicator; in fact Jen will tell you I’m terrible at it. When you add four young backpackers from three different EU countries, all sorts of problems have started happening.

The two Italians have been great, they have more friends in the local area than we do and there’s hardly a single night they aren’t out to dinner at someone’s place.

The problem is, I asked them to take back to the paddock a mob of sheep that we had just drafted (selected) from the yards. Then, 30 minutes later, I noticed the drafted sheep still in the yards and sheep from the paddock that they were supposed to take them to walking up the lane way. One of many mistakes over the months.

I have a German driving the chaser bin whose English is ok, but not great. When you add a two-way radio to the mix the most often words used are “please, I don’t understand”.

My full-time worker has a very thick Australian accent and speaks fast, so I find myself acting as interpreter. More often than not, it’s a combination of sign language and slow simple words.

You also have to remember how young and inexperienced they are in life. Many of the backpackers we get have never lived away from home, they can’t cook or operate a washing machine or even make a bed up to sleep in.

The young English young girl we have helping with the cooking and cleaning during harvest can’t drive. This is a real problem in Australia with the closest shops 50km away. Just driving to the other end of the farm to deliver a meal can be 16km on farm roads.

We like the diversity the backpackers bring to our farm and our kids get a great education from their interaction with them. We will never be short a story or two about some of the things they do…

Rob Warburton farms 3,000ha with his wife Jen and two daughters in Kojonup, below Perth, in Western Australia. Cropping includes wheat, barley and oilseed rape. Wildflower seed is grown for retail. Merino sheep are reared for wool and meat.