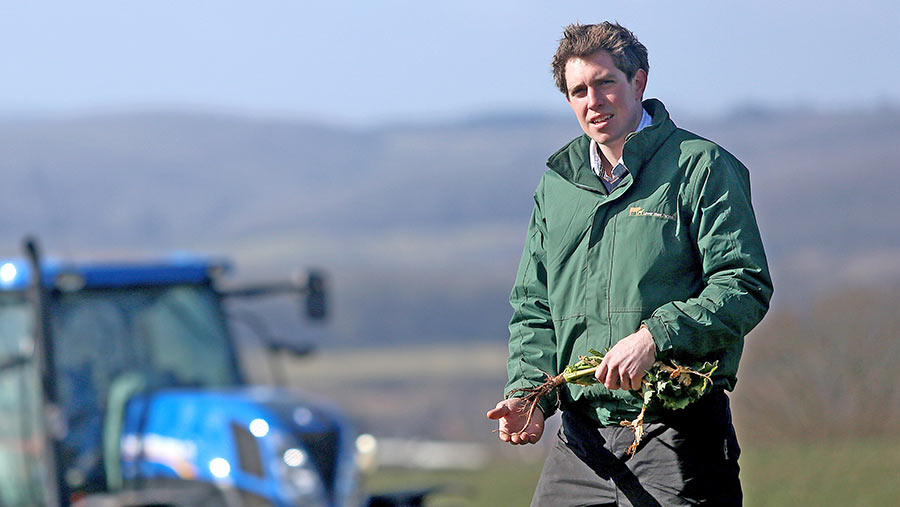 Winter seems to have progressed the wrong way this year – mild and wet to start and then becoming colder and drier later on.

As a result, the crops have steadily continued to grow for most of the winter, except for the past few weeks, when I wanted to get going and everything stood still.

The strong, cold winds seem to have taken their toll on some of the exposed wheat, with the leaves going some very unusual colours.

However, despite this we did manage to make progress at the end of February where ground conditions allowed us to get the first application of nitrogen on the barley and some on the backward oilseed rape crops.

This window of opportunity was somewhat of a blessing, as the barley was starting to look hungry. It’s not surprising as our soil mineral nitrogen tests showed only 12kg of nitrogen/ha.

In contrast to this, the green area index measurements of the oilseed rape were on average 0.6 higher than last year, equating to double the amount of nitrogen in the crop.

Spring drilling is yet to start as soil conditions are still not favourable and we are waiting for our seed, which is a bit concerning.

Elsewhere on the farm, lambing is into the final quarter, with most ewes and lambs outside. This as early as it has been for a few years. Calving is in full swing, with many that took on the first service calving in the first seven days.

We have now sold all our wheat, wrongly or rightly, and this has got me thinking how the current low prices will affect our marketing strategy in the future.

If we are honest with ourselves, we could be selling wheat at £180/t, but hindsight is a wonderful thing and it is not as though we haven’t been here before.

The point is to have a strategy, to know what it has cost to produce and then have a target price. We are still waiting to sell peas and spring oats that are on contract for November/January movement.

This is having large implications on cashflow and as somebody said to me the other day, we don’t seem to be farming for profit, it is all about managing cashflow.