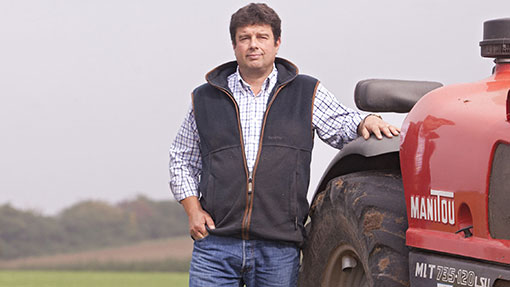 The idea of looking over the farm from a helicopter has always appealed to me. Actually doing it is something quite different. The machine itself sounds like an old combine with belts screeching as the rotors whir into action.

Once airborne though the farm takes on a whole new look. Everything is laid bare before you – warts and all.

Those that didn’t and most significantly those poor oilseed rape crops that we persevered with in the spring of 2013 have left a legacy that will take a long time to correct.

The poor crops did not have enough plants in them to suck moisture out of the land, leading to plasticine-like soil conditions come cultivation time in August 2013. Every wheeling from each cultivation pass is visible from above.

What should we have done? Hindsight is wonderful but the pressure of income is a large stick. The ground, predominantly heavy clay, needed a good crop to remove moisture and improve soil structure.

Given the same scenario again I would not hesitate to burn the crop off and get a cover crop on there. Where neighbours did just that the difference in crops is staggering.

I know good crops are not just down to one decision last spring but also more to a lifetime’s investment in the soil in terms of drainage, organic matter and cultivation choice.

Looking at a lot of crops this year I think there will have to be a big, strategic change in what we do. The blackgrass situation is worsening and I can see myself leaning towards some spring cropping or even fallow on the worst bits. Chemicals are not working so we will have to be a lot smarter in the way we tackle the problem.