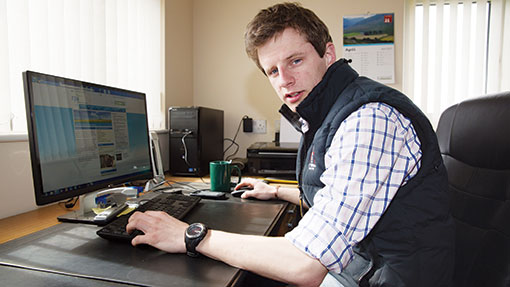 Last week I attended the NFU Conference, which was a brilliant event once again. The attitude and positivity of the farming industry was really evident.

Numerous sessions talked about the industry’s ability and potential to use science, technology and skills to move forward. The “can do” attitude was to the fore as always.

One speaker, a, ex-investment banker from the US, who retired at 37, seemed rather convinced it was now the era of the farmer, and that soon we’d all be driving a Lamborghini.

While it wasn’t all good news – CAP issues, TB, flooding and supermarkets fulfilling their promises being the main issues going forward – it was great to see and hear from those behind the scenes how just much hard work the NFU has already put in to tackling them.

Oilseed rape is now starting its race for the sky, but at the time of writing conditions still hadn’t allowed any spraying or fertiliser application and the growth stage cut-off for Galera (clopyralid + picloram) is fast approaching. Late drilled wheat and winter beans have emerged well; the lack of cold weather may have helped although emerging in water logged soils have also taken its toll in places.

I’ve also progressed with the direct drilling side of things since I mentioned it and cover crops a few months ago. A John Deere 750a disc drill has been purchased, which will give me flexibility to drill in a number of situations from cultivated to zero-till.

The news of the Co-op’s plans to sell some of, or all of its farming businesses has got the industry talking. It’s certainly a big deal. The fact that the Co-op has had its own farms since 1896, coupled with the losses the business has made, raises the question of whether it’s the beginning of the end for “the good for everyone” supermarket.

While the Co-op considers the farms a “non-core” part of the business, they set the Co-op apart from its competition with a different “buy British” selling point.

So if anyone is thinking of buying some of it and wants someone to farm it for them, give me a call.