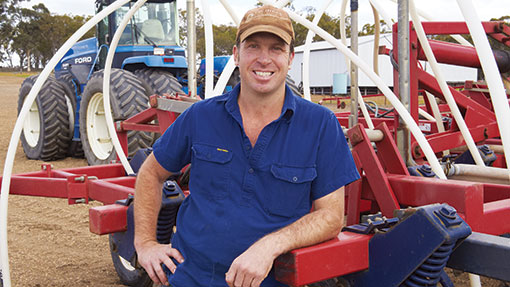 It’s been a very long hot summer, now followed by a long hot autumn. Everything is covered in a fine layer of dust. At the end of the day, there’s nowhere on your body the dust hasn’t penetrated, and you could start a small vegetable garden with the amount of dust you blow out of your nose.

We’re about three weeks away from starting seeding and the panic button has been pushed to get the gear put back together and in the paddock. It’s not a bad time of the year to be fixing machinery, with cool mornings and afternoon temperatures of around 26-28C.

It’s also the time of year to try out some new ideas; this year it’s placing soil wetter behind the press wheel to aid to water penetration. After 15 years of no-till cropping, with full stubble retention our soils have become soft, full of organic matter and very water repellent. It’s that dusty dust that’s causing the problem. The organic matter, full of plant wax, is creating a fine layer in the top 5cm of the soil.

Water can pool on the surface for hours before it finds a pathway into the soil, sometime bypassing the topsoil and the seed planted in it. It’s becoming a major issue. There are three options available: ploughing to bury the topsoil; placing fresh unaffected soil on top; spading to mix the soil and wetter. I’m not doing the first two, as it would take me a month to pick the rocks and sticks from just one paddock.

So it poses an interesting question. For the past 15 years have we been doing the right thing retaining stubble and not tilling the soil? On the positive side, the soils and far better and more productive than when we started and the machinery used for no-till has increased our efficiency. On the negative side, we are now spending our productivity gains on fixing the problems caused by this efficiency. What I do know is: that in time we will find out.