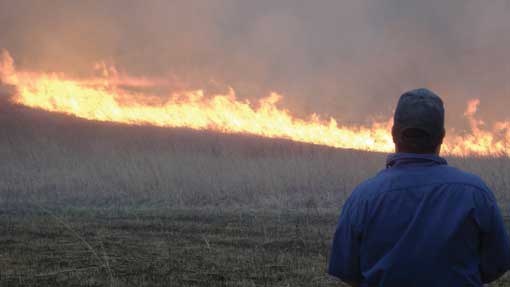 For the fourth year in a row we enter spring in drought. Parts of the county received up to six inches of rain last week, but the northern area where I am based missed out altogether. Temperatures here continue to be colder than normal, so nothing is growing, not even weeds.

I live in some of the last remaining native tallgrass prairie in the USA where warm season grasses have grown here for thousands of years. My county has more than half a million acres of grass, which becomes extremely flammable during droughts.

Supposedly, the Native Americans noticed the bison preferred to graze areas that had been burned off, and started purposely starting fires in the spring time.

When Europeans came here they eventually adopted the practice of controlled burning.

In normal years, yearling cattle will gain more weight on burned pastures, but in a drought burned pastures will yield far less grass. Burns need to be made in the last half of March through to April to be effective and not damage the grass, so the decision must be made now.

For the last several springs, there has been nothing to burn because of a several year-long droughts. This spring there is a lot of old growth thanks to heavy rains for six weeks last summer.

What is a controlled burn on a calm day is a wildfire on a dry, windy day, which has to be stopped before it burns down structures. Wildfires can be caused by many things: welders, bad mufflers, electric lines, electric fences, dry lightening and, in many cases, the general public. I had a wildfire burn one of my pastures that was caused when a hawk got electrocuted on a high line and fell to the ground.

Our county is protected by a volunteer fire service of about 150 volunteers and 40 trucks. I’ve been a member for 20 years, but have been particularly busy this year fighting fires with one as large as 600ha. We need rain desperately both to grow crops and ease our fire danger.