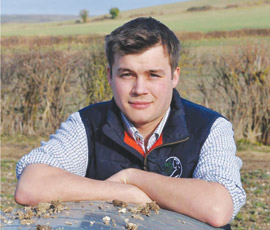 I’ve been working in agriculture for 10 years, having unusually started by milking dairy goats. Having got “the bug”, I went on to do a BSc in agriculture at the University of Reading. I did a stint in Australia chasing sheep with motorbikes before joining Sentry for harvest 2010. I have since gone on to get my BASIS qualification last winter and, hopefully, FACTS this year.

I’ve been settled at Sentry Hampshire for nearly three years, having started on the milking herd for six months before taking on the arable side in 2011. We now cover 670ha of arable land across four farms that are spread out in a diamond shape with roughly 10 miles between each. The farms all offer unique challenges, from clay with flint soils and the associated heavy wear, chalk downland with an average field size of 22ha to small ex-grassland fields of clay loams with an average field size of 5ha.

We run a minimum tillage approach, aiming to be flexible on cultivations, so we will bring out the plough most years. Our core rotation is first wheat, followed by spring barley and then winter oilseed rape. We’ll be looking at winter oats this year, too.

This autumn we rapidly finished drilling in early October, which with some recent expansion (an extra 150ha) was no mean feat. By the time you read this I’ll have some idea if my pre- and peri-emergence sprays have performed. I’m very hopeful, as there has been plenty of moisture around.

The oilseed rape is a mixed bag, with some fields full of gigantic plants and others patchy. Disease, however, is not to be seen yet – I will be waiting for one bigger dose of fungicide on the better-established crop. The smaller high erucic acid rape (HEAR) plants will still receive a two-fungicide programme revolving around flusilazole for the last time. It is a shame to lose a well-established fungicide that still performs its role very well, but at least there are superior products to replace it. Here’s hoping the kind weather carries on long enough for me to apply it.

Robert Nightingale manages 670ha of combinable cropping across Sentry’s four farms in Hampshire. Cropping includes winter oilseed rape plus spring and winter cereals. The farms are also in a range of ELS and HLS agreements.