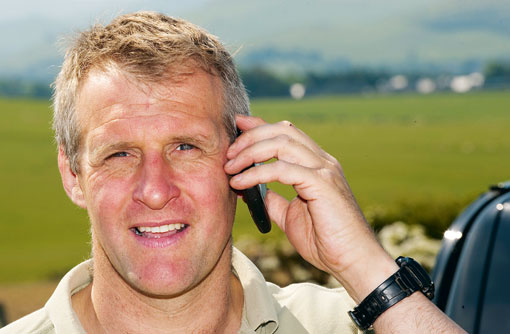 How many of you are getting fed up with the level of service you are getting from your mobile phone supplier? I chose Orange over Vodafone years ago because they offered me a better signal.

Now it seems the coverage I get around the farm is no longer reliable and I am constantly losing calls. Have they switched off a mast? What is going on? I can’t get any answers from them.

Mobile communication is now critically important to rural life and no longer a luxury. It’s driving me mad. Come on Farmers Weekly, let’s have a campaign for mobile improvements in rural areas.

The sun is shining. What a difference it makes to the mood of a farmer, but also the countryside. However, I had a trip above our farm in a helicopter recently and it is plain to see that the winter has been tough for the land and many crops. I hope Google Earth does not use many images taken from space in the last year, as we may end up looking at them for years.

Crops, though, are picking up, especially wheat, and spring-sown crops are looking well. But oilseed rape throughout the Borders and Northumberland is poor, with reports that some growers will have less than 50% of their normal crop to harvest. And I am told it will be unlikely they will be cutting it before September.

We are busy planting broccoli and cauliflower at the moment, and my eldest daughter is thankful she isn’t going to be sitting on the machine again. She does not recall her days on it last year with any affection; such is the monotony of watching the carousel go round and round, hour after hour, dropping a plant into each cup.

The three operators (who are applying sun cream just now) will have to dispense a million plants each this season. I told my daughter that this was character building, and certainly no worse than spending weeks at a potato riddle, something I did as a student. The look she shot back at me suggested this comment was not helpful.