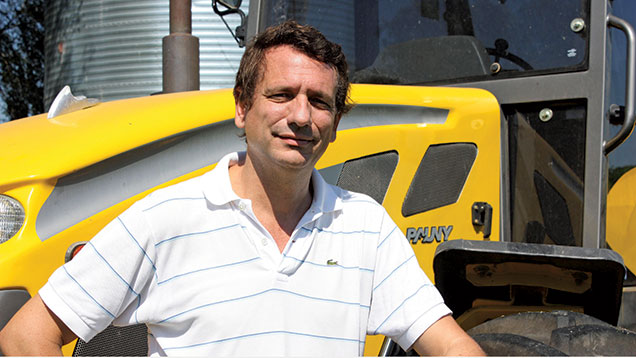 During last October high temperatures and excess rainfall cut the estimated volume of wheat production in my fields. This came after conditions preceding that month indicated promising  yields close to 3.5t/ha.

As harvest begins yield estimates are below 2.7t/ha, which is largely due to the high temperatures during the grain-filling stage.

Overall, the wheat area in Argentina is about 4.2m hectares with an average yield of 2.8t/ha predicted this year. This gives us a total production figure of 12m tonnes, which would be higher than the 9.5m tonnes last season.

Last weekend I finished planting soya beans. In nine days I have managed to plant 442ha of soya beans, with an average of nearly 50ha/day.

The significant rainfall recorded on 3 November has helped hugely with planting, replacing a lot of moisture that had been lost in the soil. Over the past week, although isolated showers were recorded, average temperatures of 23C helped dry the land enough to carry on with work.

A small plot of 35ha planted before the rain suffered from capping so we decided to use a rotary harrow to help break the surface and allow moisture through. In the rest of my drilling, germination and emergence are still excellent.

The weeds detected during drilling are predominantly annual grasses. I have also noticed flax-leaf fleabane, but the small branching and size of the weed means it is easy to control. In some areas I have detected more cases of glyphosate-resistant Johnson grass (Sorghum halepense), which is particularly worrying.

Next week I will have to check for insects such as thrips, grasshoppers, South American bollworm moth and sunflower looper, in order to maintain a high number of seedlings.