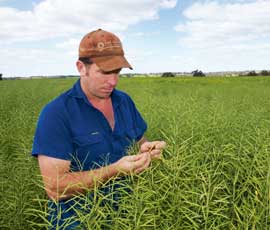 Western Australia has had one of the driest and warmest winters on record with cereal and oilseed rape crops lying on the ground during the day then recovering at night with the cool temperatures and early morning dew.

After one of the best breaks to the season for 10 years, it was heartbreaking, and for many, it was going to be the last crop they grew.

Until a few years ago, I was under the impression that to grow a good crop was all about nutrition – the more you threw at the crop the more yield you got. The trouble was yields weren’t going up, but costs were. It wasn’t until another farmer from another high rainfall area explained to me that crops in Western Australia don’t senesce, they die of drought instead.

So for years we have been growing these great looking, dark green large biomass crops that should, according to the books, yield well, but in reality all they were doing were wasting water through transpiration during the vegetative stage and dying.

Now it’s all about establishment, getting the crop out of the ground with the right plant numbers and just enough fertiliser to get it through the reproductive stage and no more. At this stage you can assess the potential of the crop and the amount of expected rainfall; we then add the right amount of fertiliser to hit the yield target then wait for the rain.

At the end of the day the difference between 3t/ha and 5t/ha is the amount of rain at the end of the season, not how much fertiliser we put on during the year. You can’t buy yield.

Across the state this is the story of 2013. Those that got their crops into good moisture and established well are now looking at one of the best crops in the past dcecade, because despite the crops lying on the ground during the winter there has been record rainfall since July and the state is set for a record harvest. For yield, just add water.