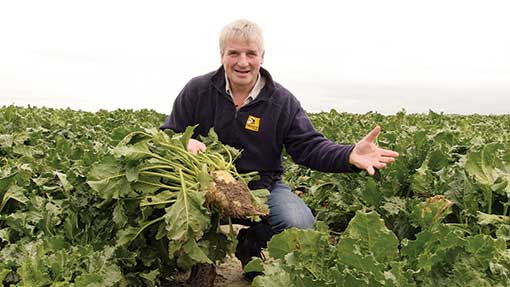 Congratulations to Robert Moore for joining the select group of Farmer Focus writers. His picture next to his first focus column must have been taken on one of the few dry days he experiences on his farm, although his hair style would indicate that the wind was blowing a gale as usual.

Robert has visited my farm with groups and when we previously hosted the Cereals event, and he certainly was an excellent host when I travelled to Northern Ireland to speak to the Ulster Arable Society’s annual conference.

Listening to him recounting that it was not unknown for him still to have crops and straw out in the fields in early November helped make me realise, again, that I am lucky to farm in the climatically favourable area of East Anglia.

It was also brought home to me last week on a local farm tour the value of my light chalky soils here at my home farm. We were visiting a heavy land farm only five miles from here, the manager showed us a field of wheat drilled in the second half of October, but on which he had already spent £110/ha on blackgrass control. Six different actives had already been used and we had been told anything less and the crop would have been swamped. On the Nottinghamshire sands I am involved with blackgrass can’t even survive! Several crops in our location, around the Royston area, are already destined for the local AD plant and decisions are going to have to be made in the next month about others which have severe infestations of blackgrass.

The first week of April is always a critical turning point in the farming calendar for us. We have stock takes and valuations to carry out on all the farms, lambing draws to a close, the last few hoggetts are sold and we start selling spring lambs ready for the Easter market. We are also going to be particularly busy over the next two months preparing for a big influx of visitors in mid-June for this year’s Cereals event.