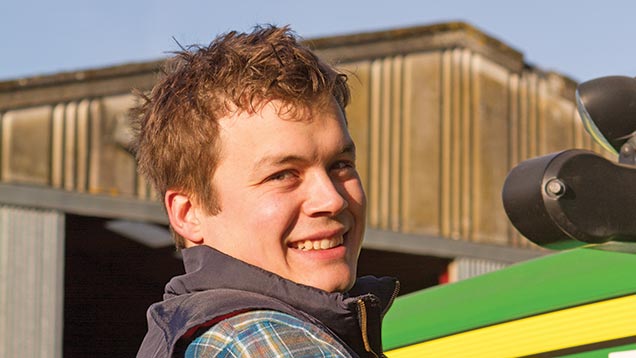 Last month I said I’d be drilling by the time you read this column, but I was not banking on a slow and steady spring with ground still wet at depth and all requiring a cultivation. With the current system, spring drilling has been a slow affair.

This spring is two weeks behind last year in terms of growth stage, visibly in OSR, but also the same in wheat, when you look closely.

Our wheats are still happily sitting at tillering with the ear just strolling up the stem, so T0s are still in the store.

Plenty of chlorothalonil with a good dose of growth regulator and a bit of cyproconazole is a straightforward T0 for us.

There are no major rust issues on any of our crops, but we’ve got plenty of septoria bubbling away just waiting for a splash of rain and some warmth.

This year will be the first year we’re trialling variable rate seed and nitrogen fertiliser using Soyl. We’ve plenty of experience using variable P and K to save on these two inputs.

However, seed and nitrogen are not “saving” inputs by only targeting necessary areas, but rather using the resources more efficiently.

As mentioned earlier, our other trial with cover crops has not been very successful, with all the ground needing to be cultivated to flow through our Vaderstad drill.

There were good lessons to be learnt which included: always drill the crop early and fertilise to get it up and big before winter; have a drill that can deal with trash easily; and have more species in the mix.

The one unexpected thing, but which is obvious in hindsight, is the stubble fields we didn’t touch cultivated into the best seed-beds.

This is down to the straw stubble acting like nature’s little chimney, pulling out the moisture. Not great for weed germination or soil health, but an interesting finding.

Lastly, it’s time for us to say goodbye to Simon, who has been a real pleasure to work with and who we’re sad to see go, and hello to Joel, who will be our mainline operator for the future.

This change brings our average age below 30, which is quite something in itself for modern agriculture.