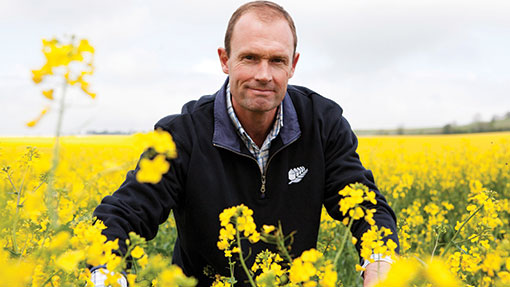 Sometimes we really seem to be making big strides in arable production. In Canada a direct drill has been developed that can apply six different products at variable rates to each of the coulters, which also have variable-rate down pressure – all controlled by wireless technology. They also use highly accurate GPS guidance and an offset hitch to direct drill exactly between last year’s rows of stubble while staying on the same controlled traffic tracks. In the UK drones are now able to map blackgrass patches earlier in the season; and using multi-spectral cameras there is the potential to be able to detect and map individual micro-nutrient deficiencies and disease outbreaks.

Other times we seem to be getting nowhere. Despite many visits to blackgrass trials I wonder if I have really learnt much more than was published in 1848 in the Rural Cyclopedia: “Slender foxtail is one of the very worst species and it often flourishes as a very troublesome weed amongst wheat and is abhorred by farmers. This worthless and annoying species prevails on soils exhausted by avaricious cropping and it resists every kind of effort for its expatriation except the prosecution of a wise and fertilising rotation of crops. It will be found a vain and unprofitable labour to attempt the removal of this grass by any other means than the opposite to that which gave it possession of the soil, which is judicious cropping.”

I wonder how the grain price stacked up against cost of production in 1848? It certainly isn’t too clever now and recently received quotes indicate I could save around £45/ha when growing feed wheat if I used urea instead of UK ammonium nitrate. In addition, it seems the conclusions of Defra Project NT26, which is often quoted in support of using AN, have now been called into question and independent trials data over many years points to very little difference in yield from the two products at similar rates of nitrogen. So for now I plan to continue with urea followed by UAN where higher protein levels are needed.

Andy Barr farms 630ha on a mixed family farm in Kent, including 430ha mainly of winter wheat, oilseed rape and spring barley. The rest is in an OELS scheme and grazing for 500 Romney ewes and 40 Sussex cattle