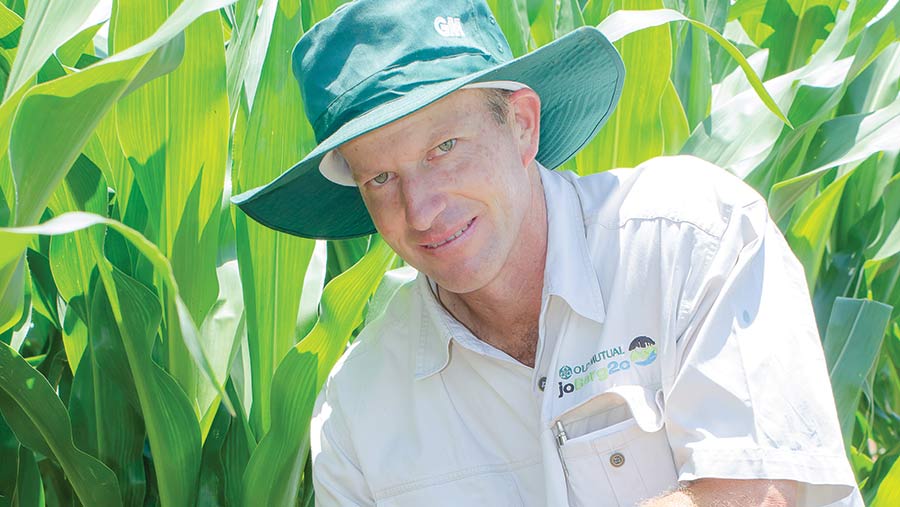 We have been living from hand to mouth with regard to rainfall, this season.

While last month we had some good rain it has turned dry very quickly.

I would love a few soakers before the winter dry season starts.

In reality, I must be grateful for what I have and the rainfall I have already received.

There are large areas of the country that are much worse off than us.

Apparently, in some places, the barbed wire fencing is totally buried under a sand dune blown out of a maize field.

While we are fortunate to have received some rain and to have a reasonable crop, one can argue that we have somewhat made our own luck.

My father started to dabble with no-till some 30 years ago and the farm has been seriously no-tilled for the past 20 years.

The improved rainfall infiltration and reduced evaporation have had a great impact on the crop this year. Not to mention, no soil erosion.

I have been planting a winter cover crop in my maize and soya fields for the past few years.

Two weeks ago I flew a 12 species cover crop mix over the maize.

The idea is that these plants will be able to germinate in the shade of the maize and continue to grow after the maize is harvested.

This cover crop will add to the life and improve the organic matter content of the soil.

I will also have a bit of extra feed for my cattle.

I know I am taking a bit of a chance with the cover crop as if it doesn’t rain, the exercise will be wasted.

I accept the risk and am happy to continue, as I believe that the potential benefits far outweigh the risk.

To me, this highlights the need for radical changes in crop cultivation practices in those areas.