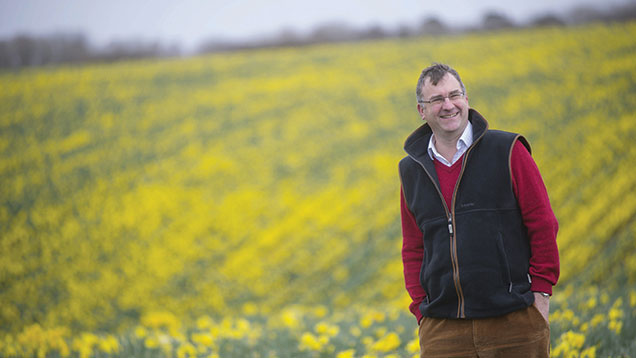 Daffodil harvest is now just about behind us.

After a terribly slow February, thanks to the cool conditions, I was fearing a warm March would result in the flowers trying to catch up and that we wouldn’t be able to pick them quickly enough.

Luckily, and sometimes you need a bit of that, the temperatures have remained steady meaning the budget has been met.

Once the final returns are in, I will be able to assess whether the financial targets have been achieved as well.

On the wider arable front, the first round of nitrogen has been completed along with the second and final on the Maris Otter malting barley.

The cool spring weather so far has given the impression that things are late, although this is not always borne out by the crop growth stages, particularly with the oilseed rape.

“I have held off potato planting during March partly because we have been busy with other things, but more importantly, because I felt that the soil temperature was too low.”
Jeremy Oatey

Dry weather has meant that it has been possible to make good progress with drilling the spring beans and spring barley which have gone into good seed-beds.

I have held off potato planting during March partly because we have been busy with other things, but more importantly, because I felt that the soil temperature was too low.

I recently spent two days helping at the Cornwall Farming and Countryside event held at the Royal Cornwall Showground.

This was an opportunity for 1,500 primary-school children to attend and experience many different aspects of the farming and food industry. There were many “hands on” activities across the whole spectrum of the industry.

I was involved with the grain exhibits demonstrating how many different food products can be made from the staple crops.

The children’s level of interest was amazing and full credit needs to go to the organisers for putting together such an important event. From what I gather, it is almost fully booked by schools wanting to come in 2016.

I have tried to resist commenting on the Basic Payment Scheme other than to say what a shambles. As someone who is involved in putting together a number of applications through our contract farming, I am really looking forward to going back to paper and maps.