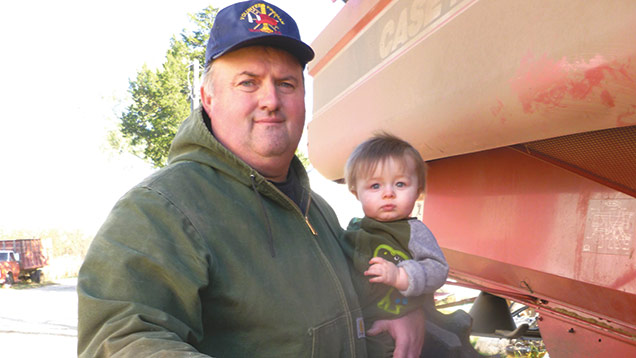 I am happy to say I wrapped up harvest on 13 November and would classify the 2014 yields and price as decent, although if I had to survive solely on the crops and didn’t have cattle, things would be plenty tight right now.

My other interests outside of farming are history and genealogy.  Kansas took a state census every 10 years from 1865 to 1925 and a few weeks ago I discovered they included an agricultural census for the townships.  I hope readers will find the information as interesting as I did.

My grandfather’s grandfather Arthur Hind was born in Worksop (Nottinghamshire) in 1850 and came to the USA in 1873 with his parents.

The family settled near Chicago, and worked laying track for the railroad. In 1879 Arthur Hind had bought 48ha of land originally owned by the railroad company.

Evidently when this state was first settled there was a big push to plant fruit trees, as he lists 45 apple trees and 40 peach trees among his possessions.

He had 100 hens, 260 cattle, 60 pigs and a Fordson tractor. All the labour was from the family – my grandfather and his brothers were in their early teens – and all the corn was picked by hand.

I am extremely proud of my immigrant heritage and the fact my family came to this country with nothing and were able to become landowners.

Although the fruit growing in Kansas was largely a failure, we still raise cattle on the prairie grass and grow corn.  I hope 136 years from now I have great-great-grandchildren farming.

Brian Hind farms 1,250ha of prairie land, of which 770ha is family owned and the rest rented. Of this, 330ha is arable cropping with maize, soya, grain sorghum, alfalfa plus a mix of rye, triticale and turnips for grazing by 200 beef cattle. Grassland is used to produce hay