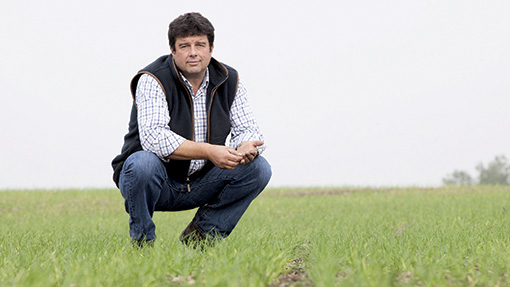 Spray days seem to be few and far between, as we either have a howling gale or rain.

The workload is starting to build up, with some wheats now needing an Atlantis mix where blackgrass has just started to emerge. The winter barley at the moment is clear of blackgrass as the pre-emergence herbicides have done a great job.

All the oilseed rape received Centurion Max, which is working. The urgency now is to get a fungicide on the whole crop, some of which will require growth regulation, but I am sure the pigeons will help with that.

The land destined for spring barley is now covered in a mat of blackgrass, with no real difference between the land that was uncultivated or lightly cultivated. The land that we ploughed has areas of blackgrass on it, but they don’t correspond to where it was bad in this year’s winter wheat crop.

I can only assume we have brought back to the surface viable seed from previous years, but bear in mind this field has not been ploughed since 2007.

Our attention now, though, is now firmly focused on security. We have over the years fenced gaps and put in a lot of gates, many of which have been rammed by those who enjoy pursuing hares or deer with dogs. The latest incident has been quite sickening. On one of our irrigation lakes there is a pair of breeding swans that earlier in the year had three signets, which are now three-quarters grown. Just over a week ago we found a dead signet, which appeared to have been killed by a dog’s jaws clamped tightly around its neck. The RSPCA have taken the signet to carry out a post-mortem.

To finish on a positive note, there are some excellent Nuffield reports that have been published lately, which on a dark and damp autumn day prove very thought-provoking. The dilemma now, though, is do we  further investigatethe idea of controlled-traffic farming, cover crops and direct drilling or a combination of all of them?