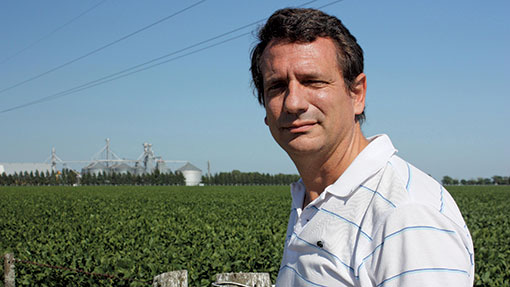 In recent weeks we have recorded heavy rains of up to 70mm. This has been vital for the fields soon to be drilled with soya beans.

For now, there is enough moisture in the soil, but if the heavy rain continues then the low-lying areas will suffer from excess water.

More rain also means we could encounter problems with our soya bean and sorghum planting and may have to delay it until it dries up.

Existing wheat crops have passed their critical flowering period and look set to be categorised overall from good to very good. The chances of achieving yields of about 3.5t/ha look very good.

Meanwhile, although I have not planted maize on my farms, planting locally is going very well, with 88% already drilled in my district.

In general, the emergence and establishment of seedlings are very good.

In the case of soya beans, the break-even yields are up 15% on last season and in many cases are above the local average productivity.

A new analysis of margins shows that break-even yields in soya beans increased between 100kg/ha and 200kg/ha when taking the new prices at harvest 2015 into account and assuming an average yield of 1.6t/ha.

The current average break-even yield in my own fields is 1.8t/ha, but this rises to 3.4t/ha in the rented areas located close to my farms.

This higher financial risk on lower-yielding land, in rented fields and for farmers with financial troubles, will see farmers like myself using a low level of technology to minimise input costs.

In conclusion, the economic performance projected for soya beans in 2014/15 is not encouraging.

A combination of factors – falling international prices, increased production costs (kg/ha) and retention export tax – mean that the only crops we can grow with some reasonable margins must be located near to Rosario ports.