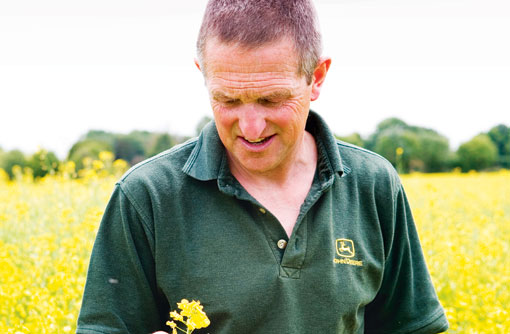 Firstly an apology to all of you who received spam emails from me recently. My email account was hacked by somebody on a mobile phone in Taiwan.

This seems to happen with an alarming frequency now email is such a part of everyday life, and yahoo users seem to suffer more than most. Changing email accounts is much like changing bank accounts, fraught with difficulties and weeks of inconvenience.

The oilseed rape has reached the flowering stage, but is patchy. However, I think it will still yield as much as a good spring rape crop without the expense of re-drilling. Some of the flooded areas have been re-drilled with spring oats, which are now all up and away.

The spring beans took well over a month to emerge, but all look OK. With slightly warmer temperatures the winter cereals have started to move and with the worry of not having sufficient moisture, they have had a large chunk of their nitrogen. With little disease on the wheat other than some septoria, I decided to skip the T0 spray and increase the spend at T1. The usual first growth regulator has also been abandoned after the cold winds left the crops struggling.

Only time will tell if these were the right decisions to take.

With soil temperatures so slow to warm up thoughts are only just turning to the forage maize and cultivations followed by drilling.

We now use our Kockerling cereal drill set on wide spaces, which worked well last year on some very indifferent seed-beds.

So who gave Dave and Nick a kicking in the local elections earlier this week, so that they might pull their fingers out before the general election comes around?

There is no good alternative now that the wrong Milliband brother is left in charge of the other lot.