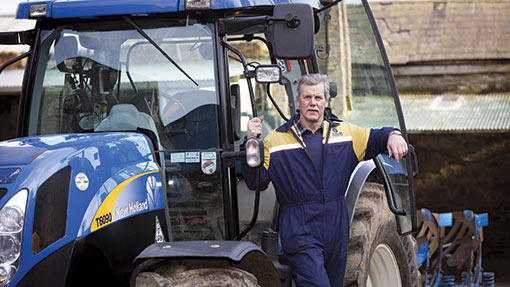 Winter crops have been going into ideal conditions. Work is so much more pleasurable when not dodging showers and clearing blocked pipes on the drill.

Emergence of the earlier drilled crops has been good and in this climate in particular, getting a good start is half the battle. I didn’t get any oilseed rape drilled this year, which is maybe just as well given the poor price and the EU neonicotinoid seed dressing ban.

I had, however, hoped to put some into land that I have been renting for a number of years, but unfortunately couldn’t agree with the owner on who should establish the entitlements next year.

This is a bit of a problem with our system in NI and is partly due to a lack of clear guidance as to who qualifies as an “active” farmer. There are a number of non-farming landowners who are keen to establish entitlements on their own land in the hopes of getting an increased payment from Brussels, which is not what the scheme is designed for.

We are also lacking firm guidance on “greening” and I still don’t know how many of my hedges will qualify towards EFAs. This means holding back some land for spring crops which produce a lower margin – not a good situation.

I recently had to complete my “grandfather rights” assessment, which I managed to do with a complimentary “Good knowledge in all areas” comment at the end. While I accept the need for pesticides to be applied safely, I do object to being made to take a test on the basic operations of a tractor and sprayer just because I was born before 1964. Following that logic, we should be testing anyone older than 50 on all the other numerous tasks carried out daily on farm, even if they already have an agricultural qualification!

Maybe in my “old age” I should just establish my entitlements and retire. I could then go into politics, for which, apparently, no previous experience or any tests are required.

Robert Moore  farms on the Molenan Estate in Northern Ireland, where his family have farmed for more than 200 years. He switched to arable production in the late 1990s, away from beef and sheep. He still has a small suckler herd on unsuitable arable land.