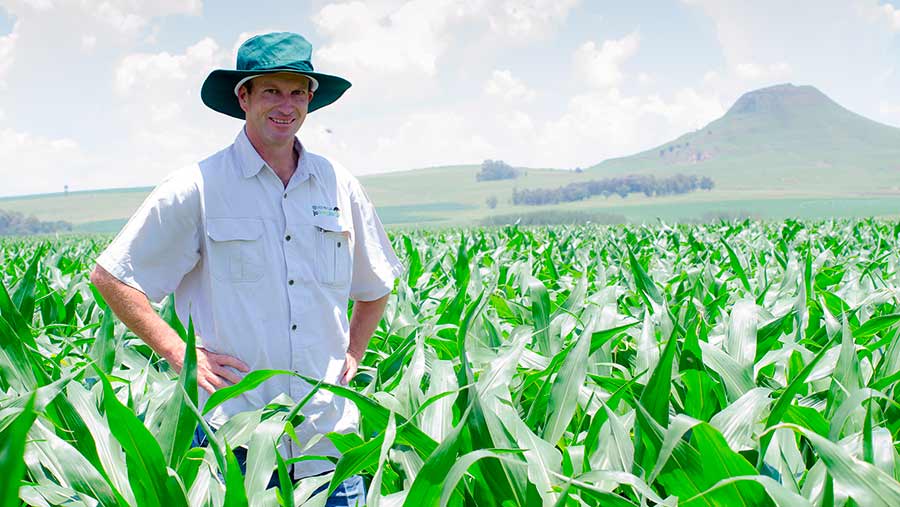 Rainfall in South Africa has been very patchy. Cape Town in the Western Cape is experiencing a devastating drought.

I farm in the eastern part of the country where we have had fair rain and our crops are looking excellent.

We had a dry January and some of my maize is shorter than normal and is allowing sunlight through the canopy on to the ground.

This sunlight could encourage weed germination so I decided to aerially seed my cover crop mix over this maize earlier than normal. The timing of this cover crop over standing maize is always difficult.

One wants to sow it late enough in the season so there is enough sunlight for it to grow but if you wait too long then you run the risk of the rain shutting off for winter and nothing grows anyway.  Hopefully I have got this timing right.

South Africa has gone through huge political change lately. The ruling party, the African National Congress (ANC), has recalled the president, Jacob Zuma, and replaced him with Cyril Ramaphosa.

Zuma had been president since 2008, and this is now being described as “the lost decade”! In this time, the expanded unemployment rate rose from 30.9% to 36.3%, which is almost beyond comprehension.

He has also been involved in numerous corruption scandals and will hopefully spend his retirement under the care of the state.

Under Ramaphosa there is a huge wave of hope sweeping the country, but… the ANC has recently resolved that it would like to change the Constitution to be able to expropriate land without compensation.

This resolution is primarily aimed at agricultural land but, if implemented, I don’t see why it will stop there. Next will be the mines and residential property, and who knows what will be nationalised next. The banks?

South Africa is desperate for foreign investment but until the country has clear property ownership policies, investors will be taking a big risk.