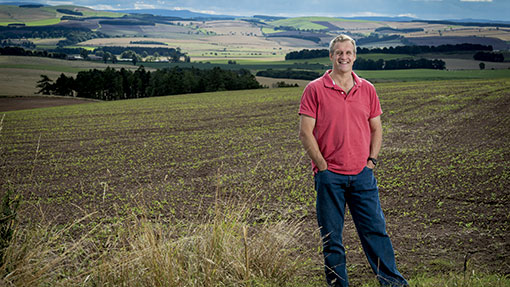 I have reached 50. Yes, I know you are thinking it can’t be true, he only looks 30! I had a good selection of country folk helping me celebrate this milestone and I had a great day. If the consumption of alcohol on the day was in direct proportion to my guests’ wheat yields this year, then they have had a very good harvest. Either that or we were all drowning our sorrows, but I don’t think so. Everyone seemed to be in great form and that was fantastic to see. Even the potato farmers got off their machines to come and party.

My great friend Murray made up some outrageous stories about me, like me winning the annual “deepest tramline competition” and reminded me of the “myth” about the Yorkshire farmer who was visiting the Borders during the time my neighbour John Jeffrey used to write disparaging remarks about us in this very column. He asked a shopkeeper in Kelso how to get to John’s farm. He then explained it wasn’t his farm he wanted to see but his neighbours! Such was our reputation. I am often asked why I don’t get my own back on him now that I am in his shoes, but he never makes any mistakes, or at least his staff don’t.

It was back to reality the following week and I am pleased to be still part of the UK (did you spot me on Question Time the week after the vote?). We are plugging on with drilling wheat and harvesting vegetables. Our broccoli and cauliflower crops ripened up very slowly until the middle of September, as it seems with many crops all over the country. But this has had the inevitable consequence of causing the pre-planned harvest programme to be torn up and thrown away and we are struggling to keep up with the harvesting now. I am sure that when I started growing vegetables I didn’t have a grey hair on my head! Now look at me. It is 23 years later. Where did that time go?