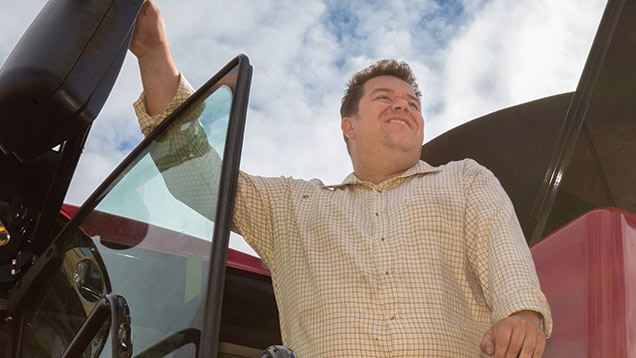 According to my hairdresser, I’ve got my first grey hairs and my hairline is receding, hardly surprising when you consider the hassles we’ve had this harvest.

Machinery reliability has been the biggest issue, but fantastic support from our local dealer Farmstar has meant downtime has been kept to a minimum.

Mind you, at times it’s felt like the fitters have been here so much, they’ve become part of our own team.

At the time of writing (25 August) we’ve finally finished the oilseed rape harvest, with disappointing results. Crops that looked fantastic will hardly reach the farm average, which I’m convinced is down to verticilium wilt due to the historical short rotation.

Luckily, the wheat is a different story and although we aren’t quite at Tim Lamyman’s world-record 16.5 t/ha (congratulations to Tim and his team).

We aren’t too far behind and although we are only 81ha in and I’m hoping the best is yet to come, overnight we received 27mm of rain and on this land at this time of year that’s 25mm too much.

Soil temperatures were down 3deg on the previous day as well, so pressure is on to clear wheat for oilseed rape drilling before it gets too cold.

For the first time in a number of years, stale seed-beds are working well, with huge flushes of blackgrass germinating on shallow cultivated oilseed rape stubbles, hopefully already helping to reduce pressure on the pre-emergent programme for the wheat.

Once I got the combine in the field there were large amounts of spring-germinating blackgrass between the rows, which is beginning to make me question wide-row rapeseed establishment.

Finally, there has been a lot of interest in our Redekop straw chopper project with Case IH. There’s no doubt that dual chopping is the future in residue management, and although we’ve had a number of teething problems, it’s nothing more than you would expect with a prototype.

So when production models are rolled out for next harvest, sub-50mm chopped straw will become the new benchmark.