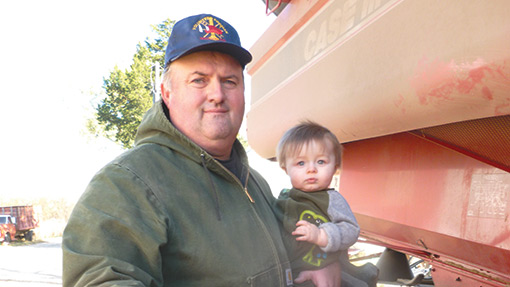 Last time I wrote about the number of car accidents involving deer in the USA. As luck would have it, at dusk 19 October my wife hit a deer with the same vehicle she hit a deer with four years ago, this time rendering the car unfit to drive and doing $5,500 (£3,450) of damage. Ironically these sorts of accidents in our area were below average for October.

We have had excellent harvest weather the last several weeks with mild temperatures and no frost until 31 October, allowing me to combine 200ha. We started on a wet note and I ran the 4WD on the combine for the first several days. Soya bean yields are slightly above average, and the price has risen slightly. My corn was a little below average, running around 100 bushels per acre.

The sad fact is that even with a decent price and a decent yield, our input costs have risen so much over the last few years that the profit from grain will be pretty slim for 2014.

One more week of good weather should wrap harvest up for nearly everyone. Most of the wheat in my area has been planted and is up with good stands. The drought map has my area officially out of drought now.

Cattle prices continue to be astonishing. With feed costs low and some really good grazing through the end of October, this will be the best year in history for cowmen in my area.

The start of November signals the start of our mid-term elections. We will be voting on the Kansas governor and a whole host of other positions right down to township clerks. This has been the most contentious state election cycle I have seen in my lifetime. The local news stated there have been 54,400 television adverts so far with countless mailed brochures and phone calls. I think it is safe to say we are all sick of it.

Brian Hind farms 1,250ha of prairie land, of which 770ha is family owned plus the rest is rented. Of this, 330ha is arable cropping with maize, soya, grain sorghum, alfalfa plus a mix of rye, triticale and turnips for grazing by 200 beef cattle. Grassland is used to produce hay.