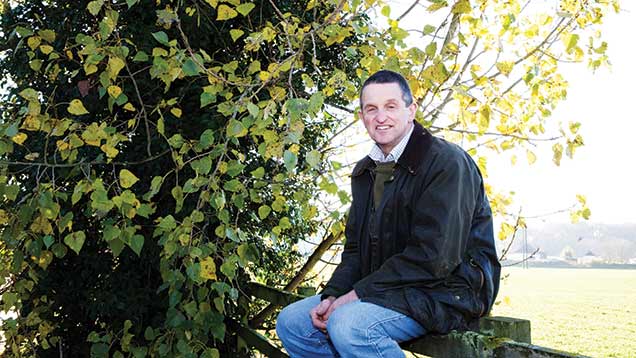 I love a challenge, it’s what makes me tick, and 2014 delivered plenty to keep me busy.

There was the seemingly endless flooding last winter, which resulted in us losing 40ha of cropping.

Then the rampant septoria which kept me on my toes both from an agronomist point of view and as an operator chasing spray timings.

However, thanks to exactly the right weather in the Thames Valley, our drought-prone soils delivered some amazing cereal yields.

The variable spraying trials for growth regulators were a non-starter, due to hardware issues that have now been resolved. But the variable spraying of pre-emergence herbicides for blackgrass produced some interesting results, although highlighting the need for accurate mapping.

At the time of writing this in mid-December, we have beaten the 2012 record rainfall by 50mm here at Dunsden Green, with a total that will exceed 850mm.

In a memorable year, by far the greatest highlight was walking my daughter Rebecca down the aisle when she married Guy Champion on Midsummer’s Day. It was a truly perfect occasion in every way.

Looking forward to 2015 I have a few thoughts and requests:

Firstly, I hope our farm leaders, when given the opportunity to talk to mainstream media, think about what our customers need to hear rather than appeasing their farmer members.

Closer to home, I’d like South Oxfordshire to get the same weather pattern that gave us such good cereal yields in 2014.

The main emphasis has to be on producing the highest economical yield. Cost per tonne is the focus, rather than yield at any price, particularly on our mixed soils.

I intend to continue looking at variable rate spraying for both herbicides and growth regulators and maybe extend it to cover early fungicides.

Then there is the election. I am fed up with it already, although from a farming perspective continuing membership of the EU is an important issue.  On a sporting note, I’m looking forward to the Rugby World Cup and the home nations doing us proud.

Wishing you all a happy and prosperous New Year.