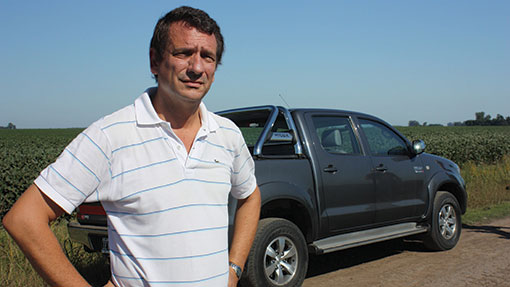 The soya bean campaign in Argentina has just finished and for many it had begun in October without moisture. In December an extreme heatwave arrived and continued into January.

In early February the opposite scenario happened – in less than 48 hours 400mm of rain fell and flooded fields in some areas.

The rain stopped after 700mm fell in the first 100 days of the year (80% of the total annual average). How was it possible that the first soya bean crops averaged 3.3t/ha nationally after these extremes?

There were losses from flooding and and it was very difficult to transport grain on unpaved roads. There were many hectares completely lost from flooding. Some lots were below 2.9t/ha in first soya bean crops.

If I compare them to other areas, for example to the west of my farms, yields of 3.6t/ha were obtained. Why were there such large differences in areas in close proximity to each other?

The difference was accounted for by the distribution and intensity of rainfall in the region, which impacted on yields. Biotic factors (weeds, insects and diseases) were also responsible for the decrease in yield, but not to the same extent.

There were areas further west that have benefited from uniform rains since the beginning of the campaign, and although rainfall was abundant in the critical crop period, light, free-draining soils showed no cases of extreme flooding.

In contrast, it was expected to be a good season for my area of soya bean crop, with welcome rainfall at the beginning of the campaign. However, excessive rain in the critical grain fill period of the crop limited output to 1t/ha, compared with original estimates of 4.3t/ha.

In summary, the soya bean crop suffered from two extremes in weather, in addition to weeds, pests and diseases. The yields were maintained within normal ranges, but increased frequency of spray applications increased costs significantly.

The high risk of growing a crop and squeezed margins this season will mean a tough year for lease negotiations in the future.