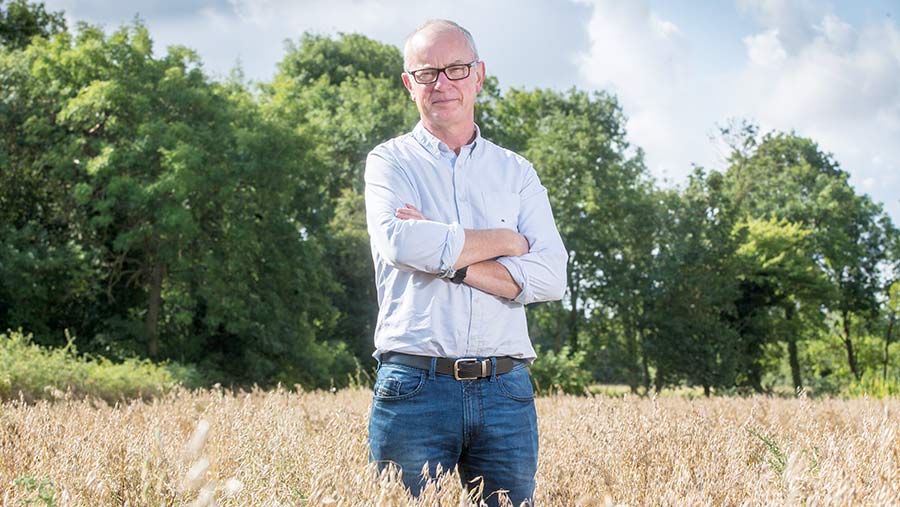 Even though we have not had the frightening amount of rain that was experienced the day before the Cereals event in Lincolnshire, we have now had 80mm in June.

This should see us through until harvest on our Hanslope soils, now that we have 100% crop cover shading our wide-sown rows.

The moisture has also got our undersown leys and fertility builders off to a good start, which bodes well for the following rotation.

However, the cool, damp weather has brought my old nemesis, chocolate spot, into our winter beans.

This is a killer disease for organic farmers, as it can reduce bean yields by 75% but, equally, the beans’ nitrogen-fixing ability allows us to extend our rotation by another year.

Interestingly, we took on a neighbours farm last autumn that has been continuously cropped, ploughed and power-harrowed in living memory, where we planted some in-conversion beans.

The beans there are half the height of our own beans and are being ravaged by the disease, whereas our own crop it is still at the non-aggressive stage and the beans are looking pretty hopeful. Healthy soils, healthy crops is a thing.

Our Polish rogueing team arrived at the beginning of June to predominately tackle wild oats and docks.

We have had the same family coming back to the farm for nearly 10 years now and they know the farm and its weed weaknesses as well as I do. They are key members of our farming family.

I’m not going to pretend we have all our fields to a hand rogue-able state, and just like when I farmed non-organically, there are parts of fields that I would rather not see, but the general direction is that we are winning the war against weeds.